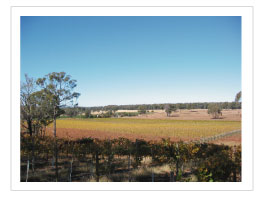 The second Regional New England Wine Show will be held at Glen Innes in the first week of October 2006. In addition to Tablelands' growers, winemakers from adjacent viticultural areas - Hastings, Northern Slopes outside New England, Western Plains and the Queensland Granite Belt will also be exhibiting.

While the New England Tablelands and adjacent slopes is today classified as a new wine producing region, it is in fact a re-emerging region with a long history.

In my post on New England Wine Regions - Hunter Valley I spoke of the role played by George Wyndham in establishing the Hunter Valley wine industry. I also mentioned that in 1831 he brought the 100,000 acre property "Bukkulla" near Inverell on the edge of the Northern Tablelands and there established another vineyard. Other settlers also planted vineyards and made their own wine.

By 1870 George had 10ha of vines bearing fruit which contributed to the total 11,000 gallons of Wyndham Estate wines being produced. By 1905, wine production from the Inverell area of New England was 227,000 litres from seven or eight larger vineyards and a number of smaller vineyards.

Between 1870 & 1920 wines from the area won many awards at wine shows in Sydney, Amsterdam, London, San Francisco, Chicago & France. A prominent English wine judge of the time wrote of the Bukkulla wines, “(They) have a character and quality above the average of most wine-producing countries. The lowest quality is better than a large proportion of the ordinary wines of Europe, while the best would not suffer in comparison to the finest known growths”.

Wine Diva provides an excellent source of information for those wishing to find out more.
Posted by Jim Belshaw at 10:17 am