Could Newcastle trams have come back? 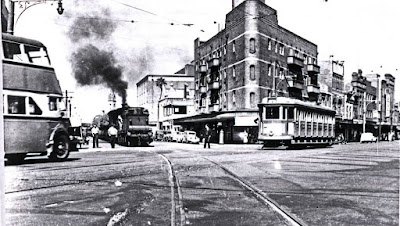 Nice piece by Mike Scanlon in the Newcastle Herald on the ending of Newcastle trams and the possibility but, for just one vote, they may have been returned.

At this point I am just recording the story for later reference.
Posted by Jim Belshaw at 8:43 pm No comments: 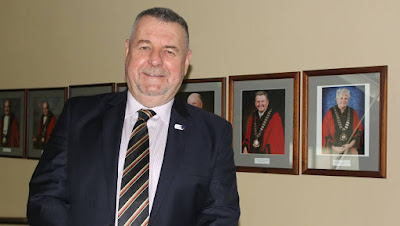 Sophie Harris reported in the Moree Champion (25 June 2018) that Uralla Shire Council mayor Michael Pearce was elected chair of the newly-formed New England Joint Organisation of Councils at the group’s first meeting in Moree on Monday.

At Monday’s meeting, the JO established a charter which focuses on infrastructure development, economic development and social issues. The group will meet again in July to “nut out any kinks’ and then after that Cr Pearce said it’s full steam ahead. Cr Pearce said the major advantage of the JO is that the member councils are in a better position to lobby the state government for investment opportunities as a group, rather than as individual councils. One of the big ticket items the JO plans to investigate is a waste to energy project which has the potential to involve the whole region.

The formation of the JOs is a State Government initiative to encourage collaborative working among councils. The membership of the JOs is set out in the table below.

The latest measure is one of a long line of initiatives from either councils or Sydney dating back to, I think, 1919. That history makes me cautious, although I hope that the new arrangements will have some positive results.

There was some dispute about Narrabri joining the New England JO. This is covered in this Northern Daily Leader story.
Posted by Jim Belshaw at 8:13 pm No comments:

What does the Halsey report mean for New England?

Dr John Halsey's recently released Independent Review into Regional, Rural and Remote Education contains some useful material but is not a great deal of help when it comes to looking at the practical implications for the broader New England. You will find the report here, a quite useful summary here, a report into residential accommodation at university here, while the Government's response is here.

A major problem with translating the implications of the report to specific areas lies in its national focus and the use of statistical constructs including especially ARIA (the Accessibility/Remoteness Index of Australia) as an analytical tool. This actually tells us very little about issues and problems at state let alone broader regional areas. Writing in 2011, I described the problem this way:


The decline in the use of the words New England was not the only semantic change affecting the North. Words are important because they affect and reflect changing perceptions. In 1950, the word country was commonly used to describe NSW outside Sydney, Newcastle and Wollongong. While the use of this term divided Newcastle from the rest of New England, a divide that at least reflected cultural and political differences, country was at least a broad, commonly understood, geographic term.

By the 1970s, country was losing favour, in part because of the growth of urban centres whose residents did not identify with the term. In its place came the word regional. This fragmented in turn. By 2000, there was something of a crazy patchwork quilt of words – country, regional, rural, remote, coastal – that overlapped and were used in different combinations. This growing confusion in terms reflected in part the increasing use of ARIA.

ARIA, the Accessibility/Remoteness Index of Australia, was developed by the Commonwealth Department of Health and Aged Care and the National Key Centre for Social Applications of GIS. ARIA measures remoteness based on the physical road distance between a settlement and four classes of service centre . In 1999 a further revision of ARIA called ARIA+ was developed that incorporated more information on the location of service centres.

While ARIA was a simple geographic descriptor intended to measure remoteness from services, its widespread use by the Commonwealth Government for statistical purposes and to guide service delivery affected the use of words. In 1950, the Australian states still retained a substantial degree of independence. By 2000, the Australian Government was involved in every aspect of policy once the preserve of the states. To the officials in Canberra seeking mechanisms to allow for national uniformity in service delivery while also taking geography into account, the ARIA classifications seemed a useful device; very remote, remote, outer regional, inner regional and major city were now firmly added to the semantic mix.

The difficulty from a New England perspective lay in the way that these various terms cut across the area’s natural geography, further fragmenting the sense of New England or Northern identity, while creating problems for integrated service delivery based on geography. We can see this if we look at New England’s Kamilaroi or Gamilaraay Aboriginal language group who occupied the Western Slopes and Plains. Their traditional territory was variously classified from very remote to inner regional, a classification that affected the services provided. People with a common culture sharing common problems received different benefits depending on just where they lived. Social Change in Australia’s New England 1950-2000, paper delivered in the University of New England Humanities seminar series, 8 April 2011.

To extend this point, this is the latest ARIA map for NSW that I have been able to find.If you look at it, you will see that the broader New England is a mix from major city round Newcastle, a patchwork quilt of inner regional, a broad sweep of outer regional, a narrower sweep of remote and then patches of very remote. Further comments follow the map. 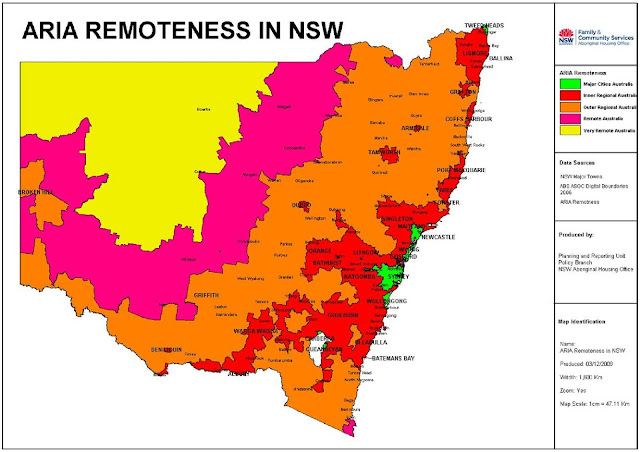 In the end, effective service delivery depends upon geography. This is recognised in the NSW Health regional structure, although even here there are problems that I will refer to in a moment. I have used the Health  structure because this seems to have become the main state regional structure.

Three regions are included within New England's boundaries as defined by the Nicholas Royal Commission, Hunter New England, Mid North Coast and Northern NSW. The Nicholas boundaries also include a portion of Western NSW. From a historical viewpoint, the names and structures may seem a little odd, when did the Northern Rivers become Northern NSW?, but there is some regional coherence. 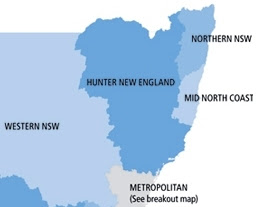 Dr Halsey's generalised analysis based on ARIA classifications supplemented by case studies has to be translated into specific approaches that reflect regional realities.Otherwise it has no meaning beyond the creation of another overlay, another set of principles, to complicate an already complicated scene.

I said that there were problems with the NSW regional structure. These are twofold.

The first is that the regions are administrative service delivery structures. They have no real policy role. Just as the Halsey inquiry dealt at a generalised national level, so NSW works with state-wide metrics. If you look at the NSW Education Department website, you will see that all the analysis and primary measures are state wide. It is not possible to use them to determine the position in the broader New England. Given Sydney's dominance in the statistics, NSW might achieve all the set targets and indicators even with total failure in New England.

The second problem is that the administrative regions used can become barriers to cooperation between areas even where that cooperation might make sense. In this way, they become instruments of further centralisation, standardisation  and fragmentation. .

We will have to wait and see how all this pans out of course. But at the moment, I'm not sure that the Halsey recommendation will actually have much positive meaning so far as the North is concerned.

Posted by Jim Belshaw at 6:38 pm No comments:

Calling ex students of the Armidale Teacher's College and Armidale College of Advanced Education - can you support the New England Regional Art Museum? 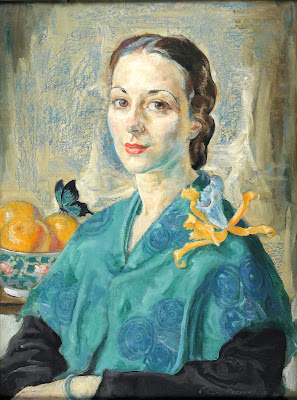 Many students who went to the Armidale Teacher's College or the Armidale College of Advanced Education will remember the paintings from the Howard Hinton Collection that graced the College walls. Those paintings now form part of the New England Regional Art Museum (NERAM) collection along with the Coventry Collection plus other bequests.

NERAM now needs your help to maintain and extend both the collections and its extension activities through the region and beyond via a bequest program. Bequests can include donations of funds, artworks, property, assets or shares and can be made through wills, estates and deeds of gift..
Why you should give

“Many of the great art museums of the world have been built around the foresight of people who have made significant donations, bequests or endowments to ensure the artworks, programs and buildings that they love are looked after properly well into the future,” said Robert Heather, Art Museum Director.

“The New England Regional Art Museum was founded around one of the most significant acts of philanthropy in Australian art history, the generous gift of over 1000 artworks to the Armidale Teachers’ College by Howard Hinton.”

“Acts like this create a lasting legacy and are a tribute to the donor who gives them,” he said.  “The New England Regional Art Museum has been treasured by the many people in our community who have generously supported it over the years and we invite them to consider planning ahead to make a bequest to support the art museum after their lifetime.”

“The future sustainability of NERAM will depend upon the passion and commitment of those people who make a gift or bequest in their will,” he said. “We believe that anyone can make a bequest that makes a lasting difference for NERAM and the wider community.”

For those in the immediate region

Locally, NERAM is teaming up with local solicitors and accountants to assist people to plan ahead by attending an information seminar on Planning your Estate and Bequest at NERAM at 10.00am on the morning of Thursday 14 June 2018.T he seminar is open to anyone who wants to learn more about estate planning and bequests in general with some further information about how to specifically make a bequest to NERAM.

Tax expert Paul Williams from NERAM sponsor Roberts & Morrow Chartered Accountants will be making a presentation at the seminar about the potential tax issues involved in planning your estate.

“The taxation implications of gifts of this nature are complicated and often overlooked,” he said. “Understanding the taxation consequences of the various options can assist donors in maximizing the effectiveness of the gift for themselves and the beneficiaries of their estate.”

Solicitor Chris Serow, Principal at NERAM sponsor Legal Minds law firm in Armidale will be discussing some of the legal problems that can befall those who don’t plan properly.

“Many people aren’t aware of some of the legal pitfalls that have the potential to make it difficult for their wishes to be met,” said Mr Serow. “These can include challenges to the will, incorrect wording and other issues which can be addressed through proper planning and communication with all parties.”

“One of the key issues for anyone thinking about making a bequest is make sure that they talk to the proposed recipient and everyone else involved as early as possible ensure that their wishes are fully realised,” he said. “That includes the team here at NERAM who want to make this potentially difficult conversation as easy as possible for all concerned.”

For those beyond the immediate region

If you would like to make a bequest or an immediate donation, you should contact NERAM via their website. NERAM will provide you with information and put you in touch with local experts who can assist you. Alternatively,. you can seek advice from your own professional advisers.
Posted by Jim Belshaw at 8:36 pm No comments: