Should we have a festival of New England writing?

On Saturday, I went to see The Turning, something I wrote about in Sunday Essay - the Turning. Tim Winton is very much a West Australian writer whose stories draw from aspects of life in the West. Watching the seventeen short cameo productions that make up the film, each by a different director, I started thinking again about the New England experience.

One of the difficulties in not having our own state or at least some form of defined structure that people recognise, lies in the ways it affects thinking about the North. New England doesn't exist; consequently, how can you talk about New England writers? And yet, New England writing does exist if largely unrecognised as a body of work.

From time to time I have tried to address this, focusing on particular writers and the links between them and aspects of New England life. While I have made some progress, I find the lack of a focal point, some bigger thing external to my own writing, difficult. There is nothing to draw things together, to present to a broader audience, to encourage interaction between those interested in New England writing as writing.

This got me thinking. Would it be possible to organise an event next year focused on the theme of New England writers and writing, not just Tableland writers but writers from the broader New England. If successful, this might become an annual event.

Thinking this over, I messaged Sophie Masson, Chair of the New England Writers' Centre, with the suggestion. It would need lot's of lead time, some sponsorship and a strong organising committee, but it might be doable. What do you think?

Posted by Jim Belshaw at 6:06 am No comments:

I accept that this has been a sadly neglected blog. I have been collecting material, but my main writing focus has been elsewhere. This includes, among other things, two chapters in the book to be published to celebrate the 75th anniversary of the creation of the New England University College.

I am now focusing on this blog. As part of this, I am going to start bringing up material that I have been collecting, but at the right date. That is, the date at which it should have been published. This may make for a somewhat crazy publishing pattern, but the blog is partly a blog of record. I need the record for later use.

The blog is also coming up on 100,000 visitors. Who would have thought it? That will be a celebration!!

So browse back from time to time over the next week, and see what I should have published! The majority of the posts will be short but, I hope, varied. They will come up in no particular order, driven simply by my notes!

Posted by Jim Belshaw at 9:06 pm No comments:

On Friday in Maules Creek - Jonathon Moylan to go to trial in November. I referred to the environmental wars that have raged across New England in recent years. Now the associated coal gas wars appear to be entering their end game phase.

Just to summarise the history. The attractions of coal seam gas led to extensive exploration and to consequent opposition from environmental, farm and local community groups concerned about the impact on the immediate environment and especially the practice of fracking. In turn, this led the Commonwealth and NSW State Governments to introduce controls and new assessment procedures. The immediate practical effect was to effectively remove NSW from the emerging gas sector, at least for the short term

Coal seam gas is big business. Removal of NSW from the equation altered the dynamics of the industry elsewhere. Further, a potential gas shortage emerged in NSW. This created the risk of action at Commonwealth level and left the Sydney Government scrabbling a little to try to find a path that might allow development while meeting or at least muting environment concerns.

My judgement is that development will proceed. The environment and local concerns are just not  important enough in the evolving political landscape to stop the process, although they will have an effect at the margin.

Posted by Jim Belshaw at 5:52 am No comments:

I see that the Prime Minister has pulled Minister Pyne into line over the abolition of compulsory student fees. While the imbroglio was going on, it was causing a real fluttering in the university dovecots since the previous abolition actually hit very hard in terms of campus services.

By way of background, these are the areas that UNE spends the money on.

Posted by Jim Belshaw at 6:58 pm No comments:

Maules Creek - Jonathon Moylan to go to trial in November

The court case against environmental activist Jonathon Moylan is expected to be heard in November in the NSW Supreme Court in November.  The charges relates to allegations that Mr Moylan created a fake press release announcing that the ANZ Bank had withdrawn a $1.2 billion loan facility for the Whitehaven  Coal's Maules Creek coal project on the Liverpool Plains near Boggabri. The grounds given were volatility in the coal market and the bank's "corporate responsibility policy."

The release appeared quite professional, was briefly accepted as genuine and caused a dip in the price of Whitehaven shares. According to the story by Hannah Low in the Financial Review (it's behind the paper's paywall, so no link), there are three elements to the charge: that the information was false; that it was likely to induce people to buy or sell; and that the person who disseminated the information knew or did not care if the information was false. The maximum penalty for the offence is ten years in prison and a $765,000 fine.

The case is part of the on-going environmental wars across New England that I have written about from time to time. Mr Moylan's problem is that the alleged actions are different from many of those involved in previous environmental protests, for they breach a key principle underlying securities' market legislation, the need for accurate market information.

Mr Moylan is being supported by Greenpiece, the Greens and local farmers. His supporters' web site can be found here.

Posted by Jim Belshaw at 5:19 am No comments:

Turning the page on a new chapter with newspapers

This History revisited column tell a story from New England's newspaper past.

“With a Technical Panel consisting of FFA Coaching Staff in attendance throughout the week, the Championships provide young players with the opportunity for identification for future Australian team camps,” Mr Eland concluded.

Over 400 of Australia’s best young male footballers in the Under 13s and Under 14s divisions will participate in the tournament, with 26 teams from around Australia contesting the two age divisions.

The Northern NSW Country Under 13 Boys will contest the Championships in Group B against Northern Territory, NSW Country, Queensland Country, Tasmania and Victoria Country.

The Northern NSW Country Under 14 Boys will compete in Group B against Football West Northern Territory, Queensland Country, Tasmania and Victoria Country.

This photo from Paul Barratt took me back. It was taken by his father in the 1950s. Further brief comments follow the photo. 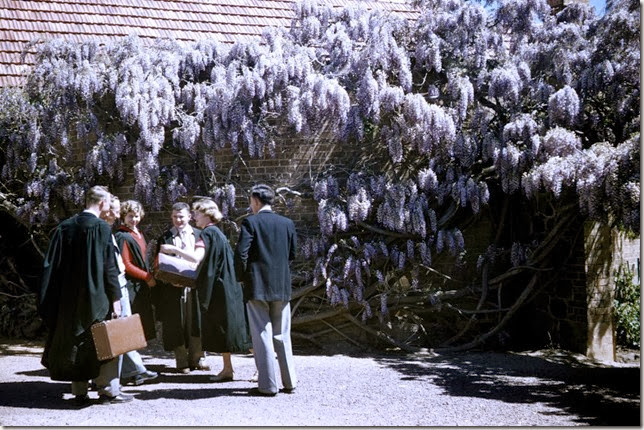 The photo is taken on Booloominbah's northern forecourt. The caption - “When the wisteria starts to bloom it is time to make your run; when the roses bloom it is too late” - captures the old exam message. The students with their books and gowns, the colour, captures a world now past.

Revolution born out of England's loss of war

Yesterday's History revisited post can be summarised in this way: the power of Empire rested on the shoulders of its public servants.

Yesterday's History revisited column introduces the story of Archibald Clunes Innes, one of the founders of Port Macquarie.

An initiative of the Lloyd McDermott Rugby Development Team (LMRDT), the two day Championship, held at Bond University, exposes athletes from across the country to Rugby and life skills.

“Ultimately the Rugby objective is selection, but the off-field objective is to encourage these young men to stay in school and continue to become better individuals and community leaders.

“At all of the tournaments the Lloyd McDermott Team run, we try to ensure the Rugby is complemented by education.”

This tournament provided the platform for selection of players to represent the National Indigenous squad at the Australian Rugby Union National Under 16s Championships.

The ARU National Under 16s Championships is a National residential tournament for Under 16 players for National, State or Territory representative teams, conducted annually by the Australian Rugby Union and is another important element of the Player Pathway at National, Provincial, Regional and Affiliate level.

The 2013 ARU National Under 16s Championships will be held at St Ignatius College Riverview from Sunday 29 September until Friday 4 October. Nine of the 23 strong squad come from New England. They are:

Posted by Jim Belshaw at 5:53 pm No comments:

Yesterday's History revisited column returns to the world of the boxing tents.