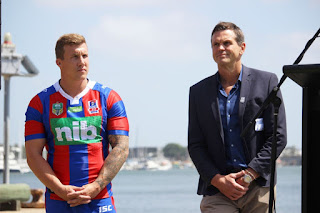 Health fund nib is to be the Newcastle Knight's major sponsor for the next three years in a deal worth around $1 million a year.

Meantime, it is not clear just how the sale process for the club is going. After the financial collapse of Nathan Tinkler, the club was taken over by the National Rugby League (NRL).

The NRL launched the sale process two months ago, appointing Tony Garrett, the head of mergers and acquisitions at Deloitte Australia, to broker a transaction they hope will be completed by Christmas. Since then, all parties have been bound by confidentiality agreements, so whatever progress has been made behind closed doors appears a closely guarded secret.

In another Newcastle Herald story, it appears that Muswellbrook Shire Council has given the shire’s oldest mine a green light to finish what it started more than a century ago.At an extra ordinary meeting on Wednesday evening, councillors unanimously approved a Muswellbrook Coal Company development application to continue mining until mid-2022. Muswellbrook Coal senior operations manager Grant Clouten said there was three years of resource remaining at the site, and the company was doing the right thing by the community to continue its work. The motion was supported by CFMEU Northern Mining and NSW Energy District vice president Jeff Drayton who addressed council, and a full public gallery, presenting reasons why the expansion should be approved.

On a less positive note, Pacific National is reported as cutting another 121 jobs. Union organiser Steve Wright said 32 drivers’ positions were going from Port Waratah, with eight from Greta, 12 from Gunnedah, nine from Narrabri and 23 from Port Kembla. The company was also moving all of its “live run” planning and rostering positions to North Sydney, costing another 24 jobs at Port Waratah, nine at Greta and five in the Illawarra. Coal has always been a cyclical industry, so the losses are not surprising.  .
Posted by Jim Belshaw at 7:44 pm No comments:

I have still to visit Tenterfield's Bald Rock. It's a spectacular site; 1,300 metres above sea level, Bald Rock’s water-streaked dome is 500 metres wide and 750 metres in length, and is the largest granite monolith in Australia.
A 3.2km loop walk takes you the summit. It can be a slightly treacherous walk; wet granite gets slippery. Now I see from the Tenterfield Times that the National Parks and Wildlife Service has installed new signage to give visitors a clearer picture of potential hazards. That strikes me as a sensible idea.

I wondered how they might do it. You can see from the photo that it's quite rugged. Apparently they used motorised wheelbarrows! Time for me to visit.
Posted by Jim Belshaw at 6:41 pm No comments: