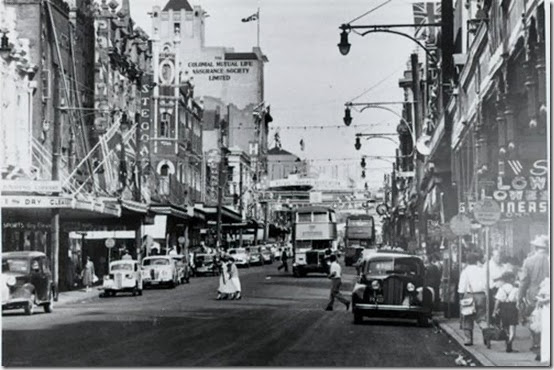 This photo came from Sean.

I do remember Hunter Street, although I am far too young for this photo.

Growing up, Newcastle was the North's big city. When I first went there from Armidale, I felt that it was such a big place!

Of course in population terms Newcastle is still a big place, But is somehow seems to have shrunk, to have lost its core identity. The suburbs stretch for miles, but the city center is flat.

Of course, this has happened in other places. I was in Armidale last weekend, and Beardy Street was almost deserted, squeezed by the shopping centers on each side. But, like Armidale, Newcastle has shrunk in public consciousness. This photo reminds us of when Newcastle was actually a big place.

A morning at NERAM - Flora, Cobcroft and Badham's Observing the Everyday 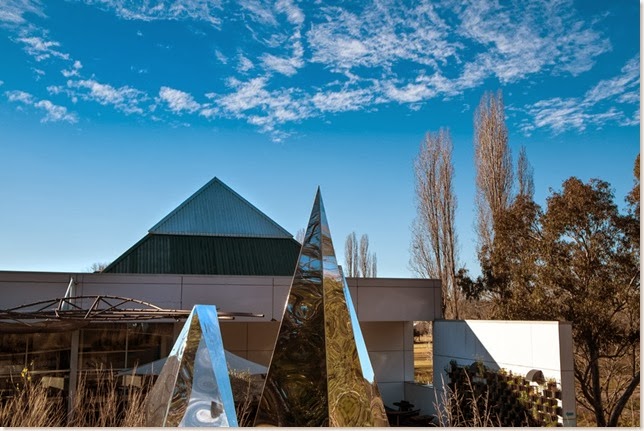 The New England Regional Art Museum (Facebook page) is one of Armidale's premier tourist attractions, home (among other things) to the Hinton and Coventry collections of Australian art. It had been some time since my last visit, and I was keen to see the new exhibitions. I wasn't disappointed.

The first and showcase exhibition comes from the Art Gallery of Ballarat. Called Capturing Flora: passion for the exotick,  this exhibition of  350 original prints and drawings covers Australian botanical art from 1700 to 1900.

The official exhibition description  suggests that it will will take visitors through a historical journey of how Australia’s amazing and diverse flora have been recorded, interpreted and popularised by botanical artists from William Dampier and the early explorers to the present day.

That's true enough, but in doing so it also highlights the fascination that people found in what, to them, seemed the exotic at a time of great fascination in Europe with nature and the natural environment. Within twenty years of the settlement at Botany Bay, Australian plants were being cultivated in a number of European countries.

This first exhibition is very good and I would recommend it, but it was the next two exhibitions that really caught my eye.

The first is Echoes in the Hedgerow by New England born artist photographer Robert Cobcroft. Cobcroft was born in Inverell in 1960 and lived in Armidale until completing his high school education in 1977. After moving to Queensland in 1988, he attended the Queensland College of Art, Griffith University in Brisbane, graduating with an associate diploma of arts in applied photography in 1991. Since then he has established a name as an emerging artist with exhibitions in Australia and New Zealand.

The pioneers of the New England Tablelands brought with them the notion of planting out "New England" as a replica of the English countryside. Cobcoft's landscapes explores the effect created by combining the Australian bush with more than 150 years of planting European trees and shrubs , the imagery translated as a nostalgic, homogenous binding of 19th century ideas together with modern photo technology. Further comments follow the illustration. 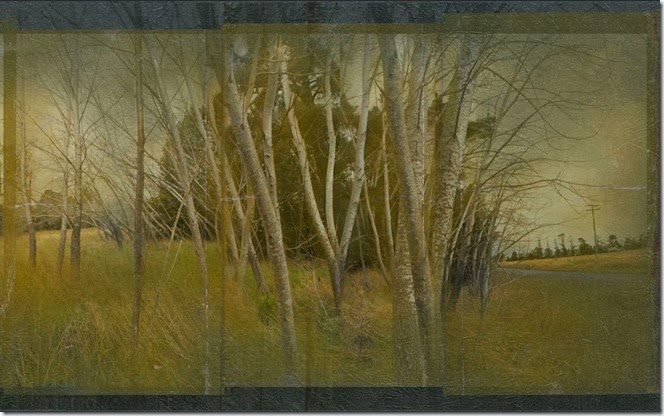 This is not a big exhibition, but Cobcroft's work really resonated with me because I grew up in the world he presents. Copies of the works are for sale at $600 for the small, $1, 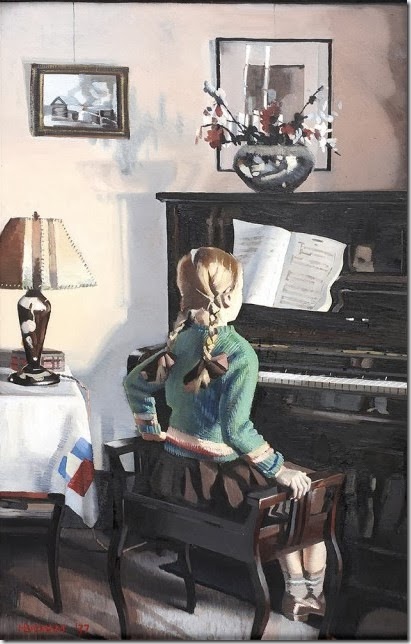 The third exhibition is Herbert Badham's Observing the Everyday. Herbert Badham was a realist painter of social urban life, and renowned for his scenes of Sydney. The exhibition concentrates on the everyday in Sydney mainly during the 1930s.

Painted in 1937, this first painting by Badham is commonly known as Girl at a piano. Digging around, I discovered that the girl is actually Badham's daughter.

This is quite a large exhibition centred on Badham paintings in the Hinton collection, supplemented by works by works in state regional galleries and private collections, including a small number of works by other artists that fit the theme.

The paintings are organised thematically to show different aspects of Sydney life - the beach, the buildings, scenes of day to day life. We really enjoyed it, but decided to take a break in the middle to have lunch at NERAM Harvest.

This was actually as funny as a circus. Outside in the rain, the men were trying to erect a marque to provide cover for Sunday's BBQ breakfast. "its like watching monkeys using tools for the first time", commented our waitress. "How many men does it take to erect a marque? Four, with one woman supervising."

We had a New England pale ale before lunch, followed by a rather nice why worry sparkling cuvee brut. To maintain the local theme, I had lamb salad. Fortified, it was time to return to the exhibition. 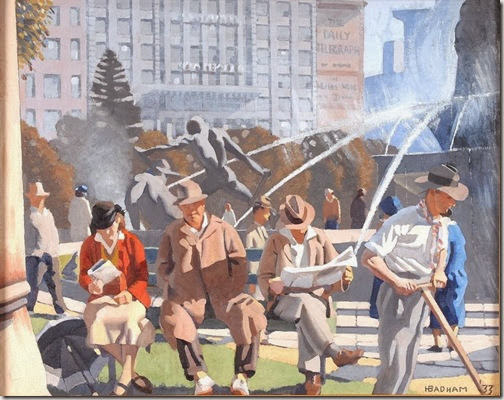 This next Badham painting comes from 1933 and is called simply Hyde Park. It will be instantly familiar to anyone who knows Sydney. It captures the day scene rather well.

We went round the paintings again, and then started selecting our favourites, Each had to select the top three.

Finally, we left. It had been a satisfying visit.

The exhibitions will be on until 2 February 2014. If you get a chance, do visit. I don't think that you will be disappointed.

Posted by Jim Belshaw at 4:42 pm No comments: