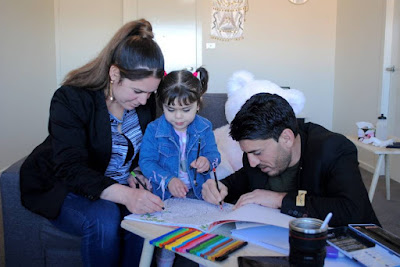 Back in August 2017 (Armidale to settle 200 refugees - overview and discussion) I reported that Armidale long fight to become a refugee resettlement centre had finally been successful.


Khalid Adi and his family colouring in. Photo Armidale Express.

Two years later Armidale is home to some 400 Ezidis.

Earlier in 2019, the New England Writers' Centre launched Stories Connect, a major program focussed around encouraging creative expression and making connections between newly- resettled Ezidi refugee families and other members of the Armidale community, through the sharing and creation of stories, pictures and music.

Supported by generous grants from the Regional Arts Fund, the Country Arts Support Program, Create NSW and Settlement Services International, with much-appreciated support from Armidale Regional Council, Arts North West and NERAM, Stories Connect launched in June. Over several months it featured a range of activities and events, from creative workshops for school age children and teenagers to community storytelling sessions; from the creation of documentary photographs by emerging photographers.

Stories Connect showcased the wide range of local talent and potential, both within the Ezidi and wider segments of the Armidale community. It’s been a great success, culminated in a popular exhibition at NERAM (the New England Regional Art Museum). Now a short documentary film has been released showcasing the project. It's rather good.

I have been asked not to embed the video because the Centre wants people to view it on its website. You will find the link here. The Armidale Express story on the launch of the NERAM exhibition is here.
Posted by Jim Belshaw at 4:37 pm