AGL has suspended operations at its Gloucester coal seam gas (CSG) project north of Newcastle, to allow tests to be carried out. after the discovery of potentially toxic chemicals in flowback water . 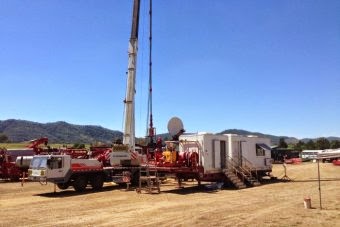 The company said the chemical BTEX (benzene, toluene, ethylbenzene and three forms of xylene) was found in a sample of flowback water, taken from two of the wells and an above-ground tank. Flowback water is water returned to the surface after it has been pumped into the ground mixed with chemicals to open up coal seams.

AGL stated categorically that BTEX was not in any of the hydraulic fracturing fluids used in their pilot operation. It is, in fact, illegal under NSW law. Rather, BTEX occurs naturally in coal seams, although amounts vary across deposits.
Greens NSW mining spokesman Jeremy Buckingham was  not impressed. AGL should now leave the Gloucester Valley, he said.

"BTEX chemicals in the water are an absolute nightmare and the Greens want a permanent ban on coal seam gas and fracking in NSW," he said.

"AGL should pack up and leave the Gloucester Valley for good following this latest pollution incident before they do any more damage to either their battered corporate reputation or our precious water.

"How many more spills, leaks and accidents will it take before the government acts to ban coal seam gas?"

For more on this story see

Posted by Jim Belshaw at 8:39 pm No comments: