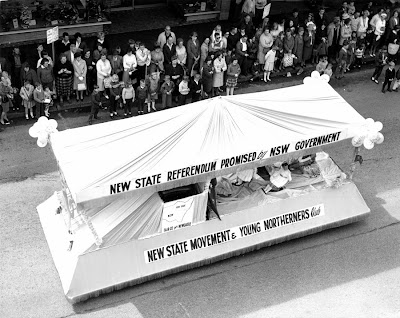 Just a short note to say that I have now brought on line the History revisited columns telling the story of the New England New State Movement up to the aftermath of the Nicholas Commission.

I stopped then for two reasons. First, at nineteen columns in a row I feared that I would outrun the patience of the paper and readers in such a concentrated burst! Secondly, I needed to do more research.

The material up to to the Second World War is now close to book length, so the columns are very selective.

The story begins again towards the end of the war when two academics, Belshaw and Voisey, launched the regional councils movement. Belshaw was just about to become David Drummond's son-in-law, but unlike his later son was not a new stater. He believed that regional councils were the answer. He became disillusioned when Sydney would grant them no power, when their areas were to small, bemused too when the regional council movement he had founded turned into a resurgent new state movement. Disillusioned, he developed the concept of selective decentralisation that would be picked up at ANU and become the heart of the Uren growth center model.

The movement he had helped re-create maintained the pressure until the 1967 plebiscite when exhausted, it effectively went into recess, now again carried forward by us.

Posted by Jim Belshaw at 8:37 pm No comments: