Round the New England blogging traps 10- a miscellany

This really is just a meander.

In Introducing the Armidale poets I began a series on a particular New England poetry school. One of the poems is Gwen Kelly's On Hungry Head Beach.

Here, alone, the rock cliff juts
above the wave-whorled sand,
ruts in a crumble, aeons old,
to filter through my hand.

This Drew Hopper photograph shows the beach with its jutting rocks in mystical mode.

For those who do not know New England, Hungry Head beach is just south of Urunga. Urunga, in turn, is on the coast due east of Armidale.

This is one of the beaches of my child hood.

I see from 18th Century Historical Trekking,1680-1760 (Australia) that on Wednesday 7 October, the New England Colonial Living History Group will have a stall in the Armidale Mall from 10am. The Mall days are always fun, so if you are in town do drop in. The blog is also fun because it is different.

To be a New Englander is to travel. We really have too, but we also like it. 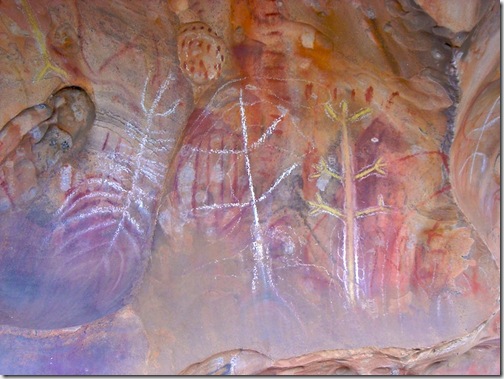 While not a New England blog, Will Owen's Aboriginal Art & Culture: an American Eye remains a great way to introduce yourself to Aboriginal art.

Still on the Aborigines, while not a blog at all (!), the Muurbay Aboriginal Language and Culture Co-operative web site provides a great introduction to some of the Aboriginal languages on New England's coastal strip.

Continuing on the travel theme, Graham and Gaye (Snippets and sentiments) have headed north from the Hunter into Queensland. You can follow the trip on Gaye's blog.

It is a little while (ten days) since there was a post on LYNNE SANDERS-BRAITHWAITE. Still, I took the time to browse back over past entries. I really like this blog. There are all sorts of insights, especially for someone who knows a little about the area.

Lynne commented on the difference between Clarence and Bellinger River floods. I think that she is dead right. The Bellinger rushes. As befitting its role as the Big River, the Clarence spreads more slowly and majestically.

Mulubinba Moments has also been travelling, this time to Lord Howe island. There are some great photos.

Paul Barrett's Australian Observer continues with some absolutely fascinating posts drawn from his own senior official experience. Like me, Paul is an expatriate who writes on many things. He seems, however, to have taken more photos!

Email ThisBlogThis!Share to TwitterShare to FacebookShare to Pinterest
Labels: New England blogs, round the blogging traps

Art is a form of inventive specification that may be channeled in numerous ways. A few artists done so well their jobs and they have creative minds. Aboriginal Art