Impact on New England of the proposed redistribution of Federal seats

Within the constitution, the process of determining the allocation of seats is set by the Commonwealth Electoral Act 1918 as amended from time to time. There used to be a provision that allowed for a weighting for country seats, but that was replace by what was called "one vote, one value."  This is enshrined in Section 73 of the Commonwealth Electoral Act.  This provides:

In November 2014, the Electoral Commissioner issued his determination stating that New South Wales would lose a seat for the next election, reduced from 48 to 47 seats, while Western Australia would gain a seat, increasing from 15 to 16 seats. The draft boundaries subsequently released for NSW proposed  the abolition of one seat within the broader New England, the lower Hunter Seat of Charlton. This change was associated with significant boundary shifts summarised in the table below drawn from the ABC.

On the North Coast, all the seat boundaries have had to shift south in order to gain numbers. In the Hunter boundaries have gone all over the place, partly as a consequence of the seat lost, partly because of the boundary shifts in the North Coast seats. Inland, the seat of New England has lost Gunnedah to to the seat of Parkes, gained Gwydir Shire from Parkes plus the Upper Hunter. Parkes has become a mega seat in geographic terms, occupying most of Western NSW and growing from 257 to 402 thousand square kilometres. All of New England's Western Plains plus some of the Western Slopes are now submerged in Parkes.

Responses to the proposed boundaries closed on 13 December with almost 800 responses received. The Commission has to finalise boundaries by February 2013.

The table below summarises the political impact of the changes based on votes at the last election. Not unexpectedly, the Liberal Party wishes to see changes, To get the results they desire. they propose transferring Glen Innes and Tenterfield into the coastal seat of Page. This then allows restructuring of the proposed boundaries on the Coast and in the Hunter. The effect would be, I think, a reduction of one ALP seat in return for a Liberal seat.

Not unexpectedly, the sheer increase in the size of the seat of Parkes has drawn opposition. The intent of the one vote one value changes was to get rid of the previous bias towards country seats. The effect of one vote one value has been to reduce the effectiveness of country representation. How one responds to that depends on the weighting placed on the local role of the MP.

The sheer scale of the changes on the North Coast and in the Hunter has drawn widespread criticism because of the ways in which the boundaries split local government areas and all the ancillary things such as tourism promotion bodies.Instead of working with one MP, people will have to work with two whose territories include competing interests.

Inland, the main objection has come from Gwydir Shire who wish to be in Parkes on the grounds of community of interest especially with Moree.

There are no easy answers. Further, the position is only going to get worse with current population trends. At either the next redistribution or the one after that, I haven't fully crunched the numbers, NSW will lose another seat and again that will come from New England. Getting half way decent local representation is becoming an increasing problem.
Posted by Jim Belshaw at 3:25 pm No comments: Links to this post

Armidale's a day on the green 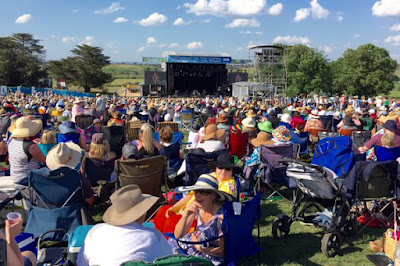 By all accounts, today's  a day on the green held at Petersen's Wines on the outskirts of Armidale was a great success. It's a beautiful venue.

Mind you, it was hot. Armidale may be known as Balmydale for several reasons, but one is definitely the normal summer climate. But this time! Not as hot as its been elsewhere during the current heatwave, mind you, but at 33c still very hot. You would definitely have needed a hat.

Promoted by Roundhouse Entertainment, a day on the green began in Victoria with a first show on Australia Day 2001. Now a day on the green runs in the summer months from October – March with around 30 concerts per season in major wine-growing regions around Australia.

Before going on, local State MP Adam Marshall was clearly enjoying himself! 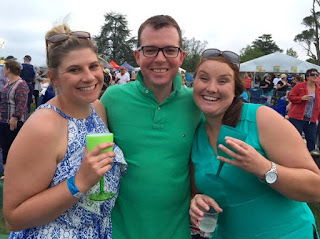 In addition to the Petersen's Armidale wine gig, there are two other vineyards with New England connections, Bimbadgen Wines at Pokolbin, Sirromet Wines in the Queensland Granite Belt.

It's remarkable how few people realise that Queensland's Granite Belt is actually the most northern part of the New England Tablelands. That border really creates a very peculiar myopia!

Both Bimbadgen Wines and Sirromet Wines host more events than Petersen's for a very simple reason.

While smaller, the Armidale event is now drawing people from across Northern New South Wales, making for a considerable crowd.

Posted by Jim Belshaw at 11:30 pm No comments: Links to this post 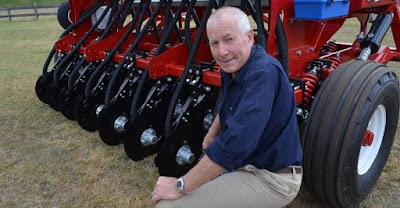 From his base at Armidale, Mr Ward identifies and sources gear across eastern Australia to meet orders from customers as diverse as land barons in Kazakhstan, to mixed croppers in Botswana and agricultural aid initiatives with African villages. Australia's minimum- and zero-till revolution of the past three decades has contributed significantly to his export success.
I will leave you to read the full story. I found it interesting as someone who tried to establish an international business from an Armidale base and knows how hard it is. After initial success, the business finally went down in the recession of the early 1990s. We were one of a number of Armidale start-ups at the time that centred on high technology or professional services and that, for a period, seemed likely to give Armidale a new economic base. In the end, most closed or moved, in part because of the cost effects of very high air fares for businesses that depended on constant domestic travel. In our case, air fares were our second biggest expenditure item after salaries.
I must try to write up the story of those days for they have lessons for development discussions today. . For the moment, Austarm seems to have a business model that is location independent but firmly based on Australian technical advantage.
Posted by Jim Belshaw at 9:18 pm 1 comment: Links to this post