Journey to the Hunter – Friday 18 April 2014: the adventure starts

My friend had not been well, so we agreed that I would pick her up at eleven. First, I had to pack the picnic basket with assorted goodies. I don’t often do this, the picnic basket that is, but we wanted to be able to stop where we liked.

A little after eleven, we headed north along the 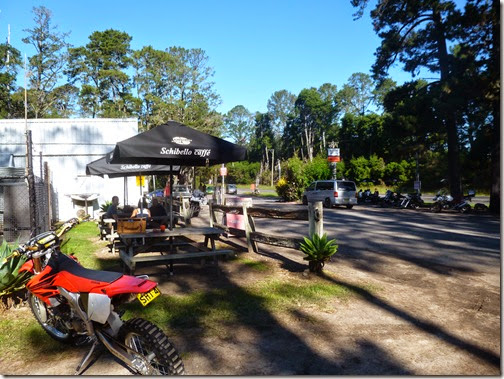 Pacific Highway. It was a gorgeous day, bright sun but not too hot. The expressway was crowded, so I was glad to get off that road and take the Peats Ridge Road.  As I drove, I thought of past trips along this road, something that I started to describe in Secrets of New England - along the Fossickers Way Day One back in 2006.

We stopped at Kulnura for a late lunch. The bikes were out in force.  We got out the picnic basket  with its various goodies, opened the wine.

Settlement around Kulnura is actually quite new. The Great North Road, the original road to New  England, ran further west and north. It was much later the settlers came to build their farms and, now, their metro escape havens.

From Kulnura. we drove on to the junction with the convict built Great North Road. I didn’t take photos; I need to go back to just explore 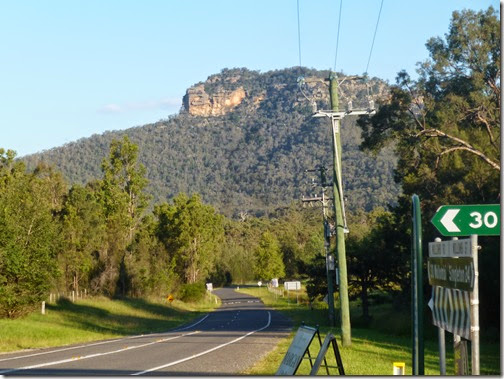 and document, We drove on through Wollombi to Broke. Looking at the Wollombi entry on Wikipedia, I was stuck by the reference that suggested the Great North Road formed one part of the Greater Blue Mountains Drive. Get real, mate. This is another example of an a-historical southern takeover.

At Broke, I stood lookng up at  Yellow Rock, part of the Broken Back Range, while my friend went to the store to buy some more water.

The Broken Back Range was to puzzle me throughout the trip. All the tourist material talks about it, but nowhere is there a decent description of its exact location! I had to try to work it out while we were driving around.

From Broke, we headed onto the Cessnock Road looking for the turnoff to Hermitage Road. Our destination, the Tuscany Wine Estate Resort lay up that road. It took us a little while to find it, but we were happy with the view from our room. There are some lovely vistas in the Hunter Valley. That’s the Broken Back Range in the background. 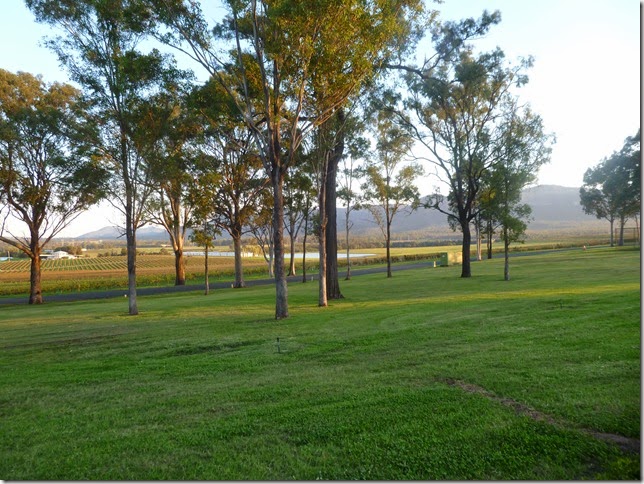 Neither of us felt like doing much, so we got out the picnic basket and settled down with some wine and assorted goodies for dinner in the late afternoon sun.

If you want to continue following the story of this trip, here are the later posts:

Posted by Jim Belshaw at 7:45 pm No comments:

The story of civil aviation in New England

Today’s post on my history blog, History revisited – introducing a flying history, starts the dramatic story of civil aviation in New England. I will bring the full set up as a special post when finished.

Later: I have added links to the three later columns at to bottom of the introductory post, link above, so that you can follow the story that way.

Posted by Jim Belshaw at 8:42 pm No comments: