Time to put Sydney into the retirement home?

With a workshop in Moruya this week, Broken Hill last week, Parkes two weeks before that, I haven't had time to scratch myself! Yet there is so much to write about. Like the reasons why it cost $900 to install a $45 tap.

As the Armidale Express or Grafton Daily Examiner of Sydney, Granny is entitled to complain about her own parochial interests. Still, she shouldn't assume that her forcibly fostered children in the rest of the current state share her concerns.

A number are grown up, want to leave home, but like the daughter in old novels are forced to stay home to look after an aging granny

Is it time to put Sydney in an old person's home, or at least a retirement village? I am sure that she would be better off without having to maintain the pretence of worrying about the rest of us.

Her sclerotic transport  arteries give her great pain. Her lungs are crowded by self-inflicted pollution. She is just so slow now to come to decisions. And she struggles to remember just what she was as Alzheimer's clouds her memory of her once great past.

Sometimes snippets of memory come back and she launches a new health program, the integrated transport plan is a case in point. Intended to ease the pain of her own arteries, she yet has to try to extend it to barely remembered children who no longer care.

I know that it's sad. it's hard, but she really must accept separation. Her family has become quite dysfunctional in their struggles to create new identities. It's time to finish it.

Today just another photo. This time the NSW Parliament Publi

David Drummond, one of the two Progressive Party members for the Northern Tablelands seat is on the right.

Drummond \was appalled by the lack of understanding of metro members of the Committee of conditions outside Sydney.

Not a lot has changed!

Can you spot the goanna?

It's been a difficult and busy month. That's my only excuse for such a long delay in posting. I have various part completed posts that I was going to back post. That was a forlorn dream, really.

I do promise to start posting again on a regular basis. In the meantime, here is a photo from Gordon's lookANDsee photo blog. Can you spot the goanna? It took me a moment. There is something fundamentally uncivil about modern communications technology. It isolates us while giving us the illusion of connection.

I am writing this sitting in a suburban train carriage. Around me, people are listening to music, phoning, texting, reading emails, watching their small screens.

I am a conversation type person. I like to talk and, more importantly, to listen. I am interested in people, curious about the things that happen around me. My family has always laughed at the way I get into conversation with strangers. I am just interested.

To someone like me, there is something deeply alienating about modern communications technology. Deprived of the conversation and direct human contact that I crave, I find that my spirit withers. Worse, I begin to lose the ability to actually talk to people when I have the chance.

This evil does not seem to affect the young, or at least not to the same extent. They, however, suffer from another problem, communications dependency.

To their parents and especially grandparents, if you were out of touch your were out of touch. You might ring in by landline, but this depended on a phone being available. Otherwise, you did your own thing.

Now we have all become dependent upon instant contact. Without it, we are all infected by worry. Has something happened? Is everything all right? What is going on?

In a way, it’s like a GPS in a car. Prior to GPS, you got a map and planned your trip. Now many rely on GPS to tell them what to do. Without it, they have no idea where they are, where they should drive. If the GPS stops, they are lost.

Don’t get me wrong. I wouldn’t be without my mobile. It’s just that it should be a tool, a means to an end, not an ingrown piece of kit.

I was trying to work out the other day when I first began to lose my ability to talk to people. It sort of crept up on me!

I am not naturally gregarious, although I have learned to be. I am naturally curious, and that’s not a bad substitute at times.

The real crunch-point came when I chose to work from home in order to carry-out the main child care role. Now I found myself isolated for long periods, leading to desperation for conversation when people were around me.

To a degree the usual social routines associated with school provided a substitute, although I found that the very isolation of day to day life made this more difficult.

The Beatles’ song Eleanor Rigby was released in 1966. That’s well before the modern communications era. The chorus goes:

To my mind, that’s the story of modern communications technology, for the number of lonely people has actually exploded since the new technologies were introduced.

There are those who remain stuck in the past, unable to use the new communications technology but who are conscious of the loss. And then there are those who have used it, only to have the interaction withdrawn. They are far sadder, for without the technology crutch their lives are much diminished. They wait sadly for the SMS that never comes.

You can actually see this working itself out on Facebook too. The act of un-friending someone has become a weapon, something to be used consciously in the warfare that human relations can become.

While these things affect all ages, I feel especially sorry for the young and insecure.

No longer can you lick your personal wounds in private. The acts of friendship and the ending of friendship are played out across time and space in the pitiless glare created by our communications systems, recorded on our timelines for many to see.

Joy is replaced by sadness and even anger driven home by their very visibility. I find that sad!

Note to readers: This is the first Belshaw's World since the ending of my Armidale Express column. I am continuing the series because it gives me a chance for a different type of writing. You can see all the columns by clicking here for 2009, here for 2010, here for 2011, here for 2012.

My thanks to Rod from Northern Rivers Geology for this one. His Take yourselves on a tour focuses on the self-drive geology tours developed by Bob and Nancy. The tours are not limited to the broader New England, although that is their core focus.

I plan to take some of the tours. How about you?

You will find more details here.

Posted by Jim Belshaw at 2:37 pm No comments: 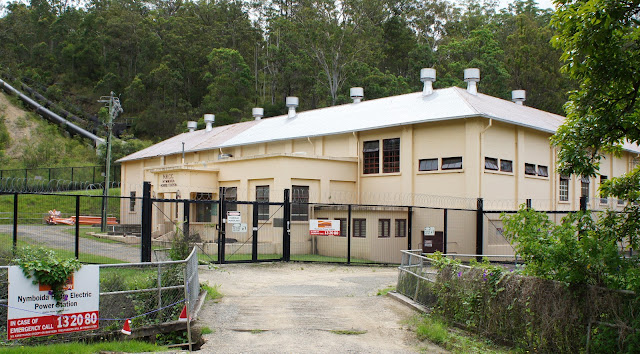 Over at his place, Clarence Valley Today, Mark's Theme Day: Electricity features the Nymbodia Hydro  electric plant. This is one photo from the post.

Built by the local ratepayers it provided electricity to Grafton, Coffs Harbour and Lismore and was the basis for the formation of the County Council which served the area for many decades until it was stolen corporatised by the NSW Government in the 1990's.

The original station reflected the dreams of Earle Page first as Mayor of South Grafton and then as Federal member. The idea of county councils as a vehicle for sharing resources between local councils was developed by Page while Mayor.

I covered the story of the ending of the electricity county councils in Social Change in New England 1950-2000 10: electricity & national competition policy.

Given what has happened since, the arguments put forward by the NSW Treasury to justify the heist look a tad jaded. In any event, there is no concealing the fact that it all represented another transfer of income and assets to Sydney without any form of compensation.

As I write It continues to rain.

The attached graphic shows the latest three month rainfall projections from the Australian Bureau of Meteorology. You can see how the probabilities are weighted towards rain across Eastern Australia including New England.

It really has been remarkably wet and also cooler because of the constant cloud cover.

The most recent floods affected New England again. Now, however, the rain belt has shifted south to cover central and southern New South Wales. My last post, Belshaw's World - the ever-changing face of Sydney, described a journey to and from work. Add continuous rain to that and it all becomes very messy.

Posted by Jim Belshaw at 6:06 am No comments: