On 24 September in Musings on a visit to Armidale – art and all that stuff. I featured in part 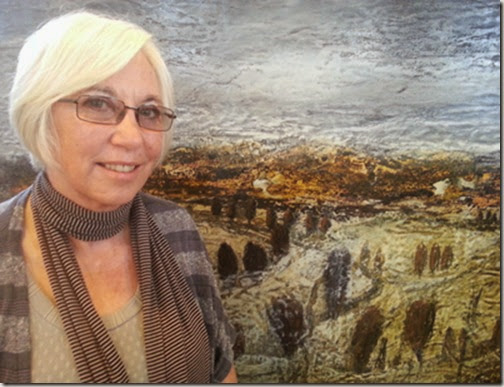 the art of Anna Henderson that was on display at the New England Regional Art Museum.

You can understand then why I was pleased to learn that Anna had won the 2014 $15,000 Norvill Art Prize held in Murrurundi, in New England’s  Upper Hunter.This is a shot of her in front of her painting "Drover's Ridge".

I see that Murrundi now bills itself as the "artistic village". I don’t have a problem with that. It’s part of the process of change that has seen the rise of other centres such as Bellingen or Byron Bay. That said, I would like to see more differentiation, more focus on the differences between, New England centres.

I was excited to see Anna’s paintings in part because of their apparent locale. They form part of the evolving tapestry that marks the emergence of a differentiated art. Few if any artists would see themselves in that way, After all, the New England that I write about does not exist in any formal sense. But, standing back, I can see it.

Posted by Jim Belshaw at 11:55 am No comments: Links to this post