It's sometimes difficult to know what Government statements mean, primarily because they contain so little information. Two recent statements, both good news, are cases in point.

The first is a 10 year funding partnership between the Grains Research and Development Corporation (GRDC) and the NSW government. More than $130 million will be invested into grains research and development in NSW over the next 10 years, "meaning researchers will have more long-term certainty in their projects and jobs, and grain growers will continue to get the latest information for their decisions in the field."

Mr Joyce said the agreement would build on the current research and development partnership between the GRDC and government, and would secure research in Tamworth, Wagga Wagga, Condoblin, Yanco and Trangie. There are 31 full time equivalent positions involved across these sites, about half of which are in Tamworth.

Reading the reports, this one primarily involves maintenance of existing research activities including presumably aspects of the work of DPI's Tamworth Agricultural Institute (TAI). 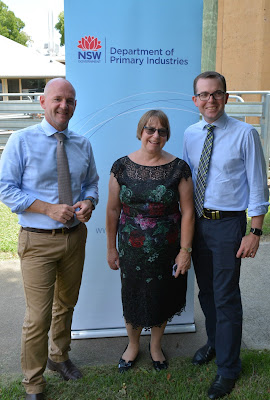 Minister for Primary Industries Niall Blair said the NSW Government is focused on supporting regional NSW and sees the five year commitment as a pivotal investment to grow core research initiatives that will benefit the sheep and cattle industries.

Under the collaborative partnership model, MDC will match the NSW Governments funding for research projects that address the five key red meat priorities. MDC has also given in-principle support to match the investment in the NLGC.

This is clearly an important initiative and one that will further consolidate and develop the rural research in base in New England. Again, though, I had to dig round to collect information to try to understand what it really meant. .In the end, I think that I have worked it out roughly, although the respective web sites are not especially clear.

.I accept that I am something of an odd person in that I very rarely run press releases without some checking. It used to be the case that press releases came with backgrounders providing factual information. That seems to have dropped out.

In these particular cases, the stories would have definitely have benefited from the supply of additional information, especially for those who wanted to write more reflective pieces later for a broader audience. This is especially a pity at a time when things such as the move of the APVMA to Armidale has led to quite condescending attacks, at a time when the University of New England is struggling to sell its research story.

In this context, I note that UNE itself did not issue a parallel release for reasons that escape me. It is not my job to go through the UNE web site to try to establish linkages, although I did my best. It is UNE's job to sell its own story.

Even though these stories got coverage locally and in the farm press, I think that they were opportunities missed.

Tingha's Chinese past features on SBS 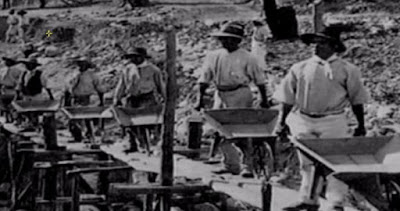 Held to mark Chinese New Year and to celebrate the town's Chinese past, this year's Tingha's Lantern Festival featured on SBS Television.

New England has a rich Chinese history. The first Chinese came as shepherds in the 1840s, then came an influx with the gold rushes during the 1850s to places like Nundle and Rocky River and then another rush with the tin boom of the 1870s. For a period, the Tablelands were the largest tin province in the world.

To mark the Festival and the SBS coverage, I thought that I should re-publish a History Revisited column, , that first appeared in the Armidale Express on 4 June 2104.

Most of New England’s small settlements have vanished in the great rural depopulation, leaving little behind beyond a few posts. This is especially true of our mining towns, for there the town survived just as long as the rush endured. Once the miners left, the town vanished, the buildings moved or decaying into the landscape. Now the few remains lie forgotten, ignored even by neighbours, their history lost.

This remains true even where the original physical presence was substantial. Tingha’s China Town is an example. Heard of it? I bet not.

China Town ran on the creek bank along Amethyst Street. However, the Chinese population was so big that it overflowed across the town. At the height of the tin boom in the 1870s, Chinese boarding houses, stores, cafes, peanut shops, wine shops, herbalists, opium dens and gambling shops competed for space in Tingha’s overcrowded town centre.

How big was big? That’s difficult to estimate. At the height of the boom, 2,500 people packed into Tingha and its immediate surrounds. The population of the broader Tingha mining district was 7,000 of whom 2,000 were Chinese. My best guess, and it’s only a guess, is that Tingha itself had perhaps 500 Chinese residents, the remaining Chinese visiting as needs demanded.

Chinese celebrations were both noisy and colourful. One year, a huge paper marquee was imported from China and erected in the vicinity of the main joss house. It housed displays of various gods and devils and of humans being punished for their sins.

The display remained open for a week. On the seventh day amidst much ceremony, it was set alight. As it burned, fire crackers exploded; there was much gaiety until the whole structure was reduced to ash. 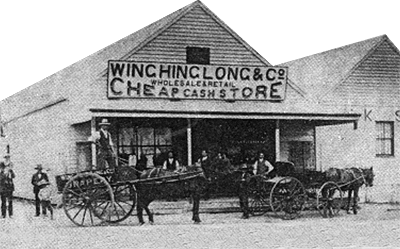 As the mines declined, people left, Chinese and non-Chinese alike. Yet many Chinese lingered, leaving their imprint. That is why stores in so many towns near the tin belt carried Chinese names, names that linger to this day; Hong Yuen (Inverell), Kwong Sing (Glen Innes and Bundarra), Hong Sing (Stanthorpe) and Wing Hing Long (Tingha).

When Harry Fay died in Inverell in August 2012, the Northern Daily Leader spoke of his connection with Inverell's iconic Hong Yuen department store. After taking over the store in 1970 that his grandfather had run for sixty years, the paper said, Mr Fay had carried on the family tradition of honesty, quality service and community spirit. That’s not a bad epitaph.

In Tingha itself, the Wing Hing Long store survives as a museum,  preserving one aspect of Tingha's colourful Chinese past.
Posted by Jim Belshaw at 4:29 pm No comments: