Today’s New England post, History revisited – Brown Street: an iconic Armidale Street, is on my history blog. It tells part of the story of this iconic street.

Posted by Jim Belshaw at 8:38 pm No comments:

Do you know any stories or histories of the University of Newcastle?

I have been asking around for histories or memoirs, but with little luck. A New England New State Movement colleague said that there was a history of the Uni, but again I have not been able to find it via search.

Do you know of any books? I really would like to find some. Otherwise, the University of Newcastle vanishes from parts of my history.

Posted by Jim Belshaw at 8:20 pm No comments:

Saturday was meant to be a lunch at NERAM Harvest. We arrived at the New England Regional Art Museum a little early.

When we arrived, we found that the NERAM Harvest team was off at the inaugural Uralla food and wine fair, Tastes of New England. What to do? Why, go to Uralla!

That meant a little time and organising, but I still had time to wander around the current NERAM exhibitions. They are simply fantastic. Here is an example from Mrs Newling's Drive, Elioth Gruner's "On the Beach", 1912.

For those who don’t know Uralla, it is a pretty little town about twenty minutes drive south of Armidale that has become a real arts centre. As we came to the showground, there were cars everywhere. The Uralla Rotary Club members were collecting post codes at the gate. Looking at me, one recognised me, they assumed that we were all from Armidale. In fact, there were multiple post codes.

“How’s it going?” I asked. “Great” was the reply. It seems that there had already been 2,000 people through the gate. We wandered up the tree lined dirt track towards the sound of distant music, not knowing just what to expect. 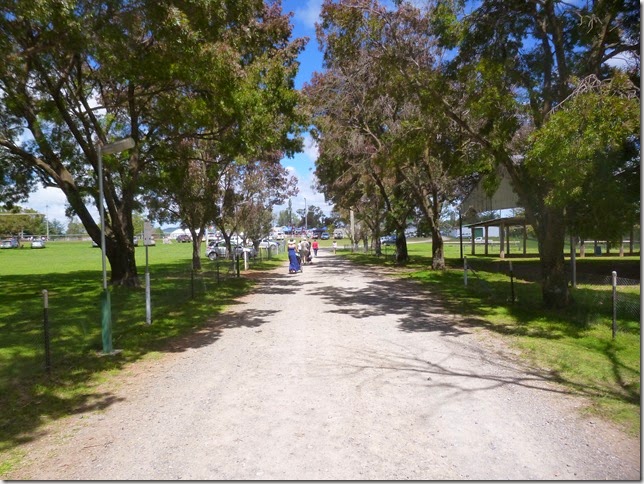 Coming through the entrance, we found that there were more than forty stalls plus a music tent and a number of kids’ entertainment areas. None had expected it to be as successful as it had been. This was the sign from the first stall we came to, Charley Ray’s Food Fusions. 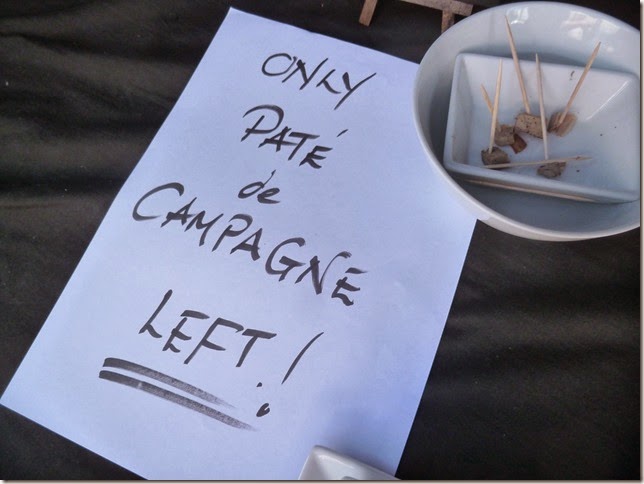 I had thought of pate as a different thing, for this was a terrine. It was only later looking it up that I found this description:

A pâté de campagne, or country terrine, is a rustic preparation, slightly more refined than a pâté grandmère mainly in that it uses only a small amount of liver—liver is a seasoning device here rather than the dominant flavor. Also unlike the pâté grandmère, some internal garnish, such as fresh herbs and chunks of smoked ham or duck confit, go a long way. The panade (notice that it's made with flour, not bread) helps to retain moisture and to enrich and bind the pâté.

Yesterday I ate the pate de compagne along with a trout dip from Deano’s Spring Water Smoked Trout with really fresh bread. Both were very nice indeed. I would give you links to both Food Fusions and Dinos if I could, but as local businesses selling locally they don’t appear to have web sites. Chaps, that’s a weakness.

Faced with multiple food stalls, the first thing that you have to do is orient yourself. So I set off to walk the stalls. 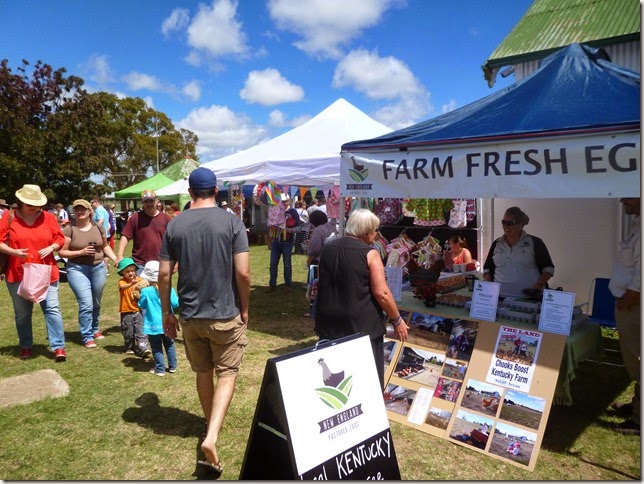 By Sydney standards the crowds weren't huge, of course, but it still took a little while to reach the music stage where The Jug Addicts were playing. This is the best Youtube video that I could find of them, but it actually doesn’t do them justice. You will get a feel for the raw energy and the crowd response, but not the range nor subtlety.

Exhausted even after our short run through, we adjoined to the bar. I drank the first New England Pale Ale while my colleagues tried a Blickling Estate Riesling. I’m not sure that we can actually call it that any more, but that it is what it was.

Reinforced, we went shopping. That too time! Hungry, we gathered a bottle from the New England Brewing Company to go with lunch. 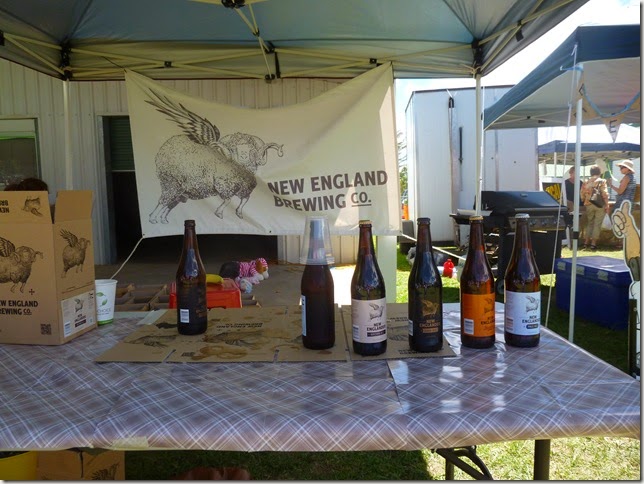 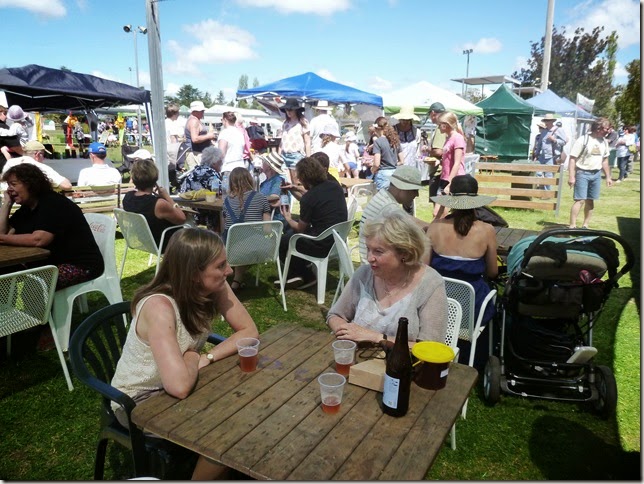 Having eaten, I went back to The Jug Addicts for a final thank you. They had been there throughout, 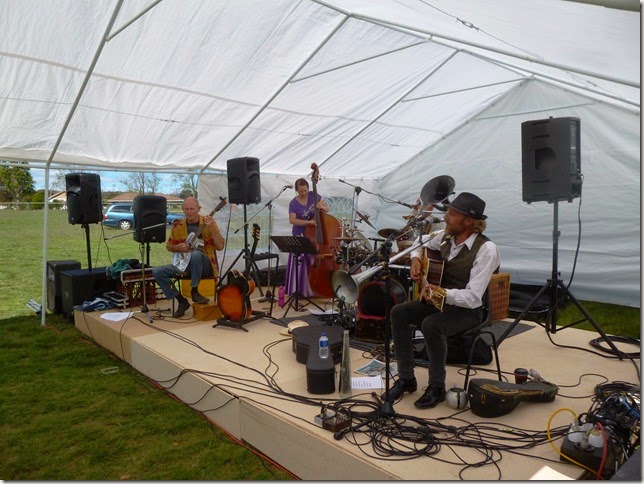 On the way out, I found an exhausted NERAM Harvest team having a very late lunch. They had no idea who I was. Still, I went over to tell repeat the story that I ran in A morning at NERAM - Flora, Cobcroft and Badham's Observing the Everyday.

The paintings are organised thematically to show different aspects of Sydney life - the beach, the buildings, scenes of day to day life. We really enjoyed it, but decided to take a break in the middle to have lunch at NERAM Harvest.

This was actually as funny as a circus. Outside in the rain, the men were trying to erect a marque to provide cover for Sunday's BBQ breakfast. "its like watching monkeys using tools for the first time", commented our waitress. "How many men does it take to erect a marque? Four, with one woman supervising."

It seemed only right, for all the participants were there at the table. Wandering back to the car, I thought what a nice day it had been.

This post, The Chinese in Australia - introducing Francis Darby Syme, may seem a little remote from our history, but some of Mr Syme's coolies ended up in New England.

Posted by Jim Belshaw at 8:00 pm No comments: