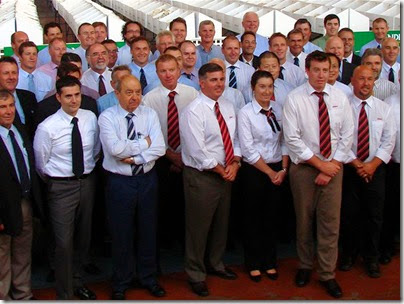 In my History Revisited column in the Armidale Express I looked at the history of wool sales in Newcastle. The posts are:

The sale marked the end of an era. Wool selling began at Newcastle because Northern growers demanded it and fought for it. It stopped in the end because the combination of technology with the decline of wool and wool growing made it unviable.

Posted by Jim Belshaw at 9:18 pm No comments:

There are hundreds of small halls scattered across New England. They are neither pretty nor pretentious, but they form one core of local life.

Raleigh is a small settlement near Urunga, not far from Bellingen, in the Bellinger Valley. All sorts of functions are held there, including the Raleigh Rumblings. This is one clip. Comments follow the clip.

i have been in so many of those halls over the years. The acoustics are often dreadful. Sometimes they can be bloody cold, but they help bind the community together.

As I research more into the history of New England, I find that that’s one of the things that really counts.

Posted by Jim Belshaw at 8:37 pm No comments:

Can we have a New England civil aviation development plan? Please? 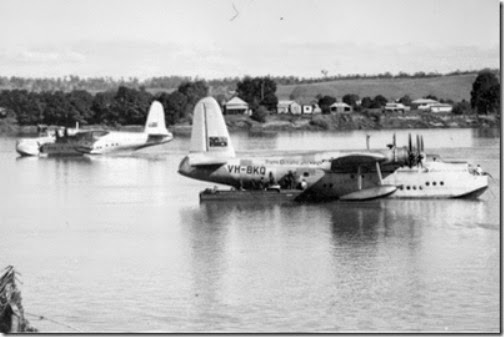 regional aviation services in NSW. The Inquiry was established on 13 December 2013 following receipt of terms of reference from Andrew Stoner, Deputy Premier and National Party Leader.

Just for something different, the photo shows Sunderland flying boats on the Clarence River when they were conducting a service from Grafton to Sydney.

You will find the entry page for the Committee here including terms of reference, submissions and transcripts of evidence.

It’s all remarkably difficult. As the economics of flying shifts, fewer and fewer New England towns have access to air travel. Those that do, have to pay high prices. It affects every aspect of daily life and severely disadvantages tourism.

While there is no easy solution, if we had our own Government then we might have a chance of preparing a development plan. We could think of Newcastle and Coffs as international ports. We could look at limited selective subsidisation of services such as Tamworth or Armidale to Brisbane just to build base traffic. We could use our tourism promotion to build our traffic rather than being simply submerged in NSW.

It is unrealistic to think that we can have the services we once had, but we could do better if we didn’t have to accommodate all those NSW interests.

I make no apologies for being one eyed about the things that I care about. Sometimes there is a negative element in this, such as when I attack what I perceive to be the evils of modern management or the rise of what I see as harshness, censoriousness or blind cruelty in modern Australian life.

Sometimes I just want to tell a story, to share things that I care about.

I have had various goes at this. I start, stop, and then go on. I am human. I get distracted by the now. I find it difficult to maintain focus. I start projects and then stop. Despite the failures and inconsistencies, there is a coherence, a focus, in the things that I write about.

Accepting my failures and inconsistencies, I have decided to start a new series called Visions of New England to try to integrate some of my material. This first video clip is an example. It features my old home town and the immediate surrounding areas. Further comments follow the clip.

Armidale is a very pretty place. It is also a lucky place because of past efforts that have created the many things that Armidale people take for granted today.

New England has become much diminished. Just at present, I live in Sydney. The things and places that I love have declined in recognition and importance. It would be nice to think that I could restore them to some degree. I will need help. I want visual material in particular. So let’s see how we go.

Posted by Jim Belshaw at 8:59 am No comments:

The Scone I remember

My main post today is Train reading – Edith Potter’s The Scone I Remember. I really have been mining Edith’s book, drawing on its descriptions of domestic life for other writing.

Posted by Jim Belshaw at 9:03 pm No comments:

I have now finished two History Revisited columns on the early story of Tingha:

Posted by Jim Belshaw at 6:44 pm No comments: