One of the common objections raised to those of us who want self-government for the broader New England is administrative complexity. Wouldn't the creation of a new state structure be complicated? Well, no, and to illustrate here are two maps.

The first map shows the distribution of land services boundaries in the North. The Hunter, North West, Northern Tablelands and North Coast Districts cover most of the traditional new state territory. 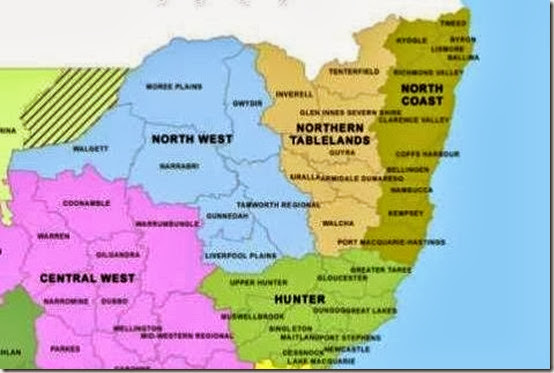 The next mao shows the health and human services boundaries, Again, the same broad pattern, in this case with three divisions, Hunter New England, Mid North Coast and Northern NSW. Most if not all of the administrative divisions display the same pattern, a pattern dictated by geography. 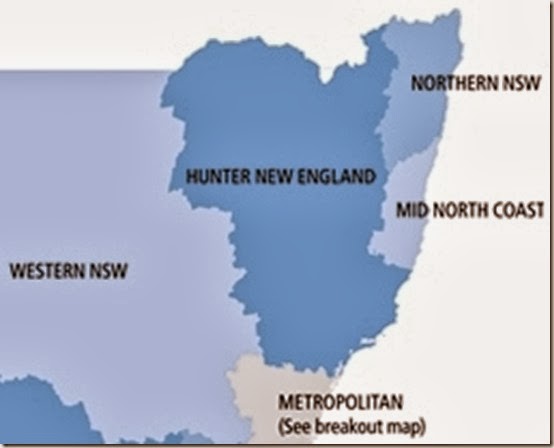 All this makes self government relatively easy to achieve in administrative terms, although there would be adjustments at the southern and western boundary edges, All that is required is the re-grouping of existing administrative units.

If he boundaries already reflect geography, does this weaken the new state case/ Not at all, Under the present system, most of those units finally headquarter in Sydney. Each of them is run as isolated entities within central frameworks dictated by NSW. They do interact, but only through head office. Despite what is sometimes called localisation, their decision making power is very limited, nor is there any mechanism for addressing common Northern concerns. From a Northern perspective, fragmentation rules.

The next time someone says how hard it would be in administrative terms to break up the NSW system say no, the existing administrative units whether in health or education or land management already reflect the basic geography of New England.

We want to reform the system by regrouping all the existing and often varying administrative units within New England together so that they can work more effectively together in meeting New England needs.From the viewpoint of the ordinary public servant in New England, their basic job won't change.  What will change is their ability to work with colleagues across regions, to do new things in as simpler world.

If you don't think that that's attractive, have a chat to any of the local staff trying to cope in the world of the NSW mega-departments, trying to deal with roles and systems created far away! Self-government would give us an opportunity to simplify things, to focus, to do their jobs more easily.

Posted by Jim Belshaw at 6:26 am 3 comments: Links to this post

At the end of September in Resuming posting I accepted that this had been a sadly neglected blog. I also said that I would be bringing up back posts; I have been doing that slowly with more to go. I haven't  publicised them. They are a bit of a rag bag lot. That will improve!

I am about to pass a milestone on this blog, 100,000 visitors. Expect a small celebration when I do.After 1,198 posts I think that I deserve champagne!

Posted by Jim Belshaw at 7:50 pm No comments: Links to this post

I have referred before to the gas wars raging across New England.

Over two years ago, the NSW Aboriginal Land Council (NSWALC), the peak body representing Aboriginal land councils in NSW, decided to become involved in resources exploration as a way of generating long term income and job opportunities for Aboriginal people. As part of its plans, NSWALC has applied for prospecting and exploration permits that, if granted, would make it the largest holder of coal seam gas exploration acreage in NSW. 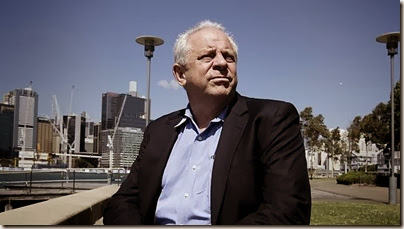 d-Smith (Aboriginal council takes on greens, farmers over gas), NSWALC CEO Geoff Scott has come out with a swinging attack on the green movement for refusing to negotiate in good faith. He also accused the Lock the Gate Alliance led by Drew Hutton and other anti coal seam gas groups of ignoring the Aboriginal community's need for economic development.

"We want something better and we don't want to rely on government. That's not sustainable. It's benevolence."  Mr Scott went on to attack the O'Farrell government's restrictions on coals seam gas development for driving up costs without improving protection of the environment.

The Greens were not impressed. Dawn Walker, the Green's spokesperson for the Tweed Valley region, said that its opposition was to coal seam gas in general and who owned the license was irrelevant. "The Greens have a no-CSG policy. We don't believe that it is a safe industry. It is not a suitable industry for Australia."

Clearly, the twain will never meet in this case.

For those like me who get confused about aspects of the coal seam gas debate, Rod Holland had quite a useful post on his Northern Rivers Geology blog, Being tight with loose terminology?. Rod has promised to write more explanatory material.

Posted by Jim Belshaw at 7:25 pm 2 comments: Links to this post

This History Revisited column is the start of a short series on a major figure in the history of New England's Roman Catholic Church in the second half of the nineteenth century.

Posted by Jim Belshaw at 8:38 pm No comments: Links to this post

This History Revisited post looks at the story of a simple, historically important, printing press.

Posted by Jim Belshaw at 8:17 pm No comments: Links to this post

National Indigenous U16 side sweeps division 2 in national championships

The national U16 titles were played at St Ignatius College, Sydney, from Sunday 29 September until Friday 4 October. The National Indigenous team were playing in Division 2. The results can best be described as unbalanced:

It would have been interesting to see how the National Indigenous side would have gone in Division One. It's actually very hard setting up balanced sporting competitions when you have such varying standards between areas and indeed over time.

Posted by Jim Belshaw at 12:56 am No comments: Links to this post

Email ThisBlogThis!Share to TwitterShare to FacebookShare to Pinterest
Labels: sport

This History revisited post looks at bushmen's' carnivals, and the rodeo. I didn't know that New England played such a significant role.

Posted by Jim Belshaw at 12:23 pm No comments: Links to this post

On 26 September, the Australian Rugby Union announced the members of the Lloyd McDermott Rugby Development Team’s National Indigenous Under 17s squad to tour France. They will play against Racing Metro, Cote d’Argent and Stade Toulousain. 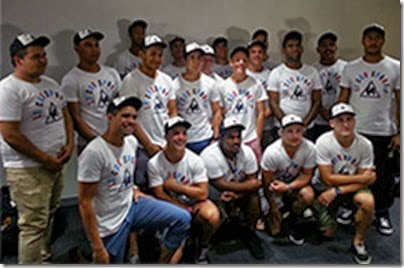 They will also take in cultural experiences at significant First World War monuments including the Menin Gate Memorial, Perth Cemetery and the Passchendale and Somme battlefields.

The tour will include visits to the graves of Private Daniel Cooper and William Allan Irwin, who was the only Aboriginal solider to receive the Distinguished Conduct Medal in the First World War.

LMRDT executive director Tom Evans said the trip was an important mix of Rugby, culture and heritage.
“This trip is important for a number of reasons,” Evans said. “Not only do these kids get to experience international travel and international Rugby, but they get to visit some places in the world that are extremely significant historical sights. We’ll be visiting the graves of two Aboriginal soldiers while we’re there and the lessons the kids take from that will be just as important as the action on the Rugby field."
“The Lloyd McDermott Rugby Development Team is really big on combining Rugby Union and education and this trip is just another opportunity to develop these great kids we work with.”

The LMRDT Under-17 squad departs Sydney on Friday, 27 September and returns Wednesday, 10 October. Three of the 23 strong squad come from New England schools. They are:

Posted by Jim Belshaw at 5:38 pm No comments: Links to this post