A happy Christmas to you all

This will be my last post for 2018. I am shutting down fully until the new year to recharge my batteries.

For those who celebrate this festive season, may I wish you a very happy Christmas? For those who are alone, and that can be just so hard, tomorrow is a time to remember our blessings no matter how few they seem.

We will continue our discussions and sharing in the new year. There is a lot to talk about. For much of 2018 I have been tied up in other writing. I hope but do not promise to be more active here in 2019. There is so much to say and report.
Posted by Jim Belshaw at 11:30 pm No comments:

Email ThisBlogThis!Share to TwitterShare to FacebookShare to Pinterest
Labels: personal 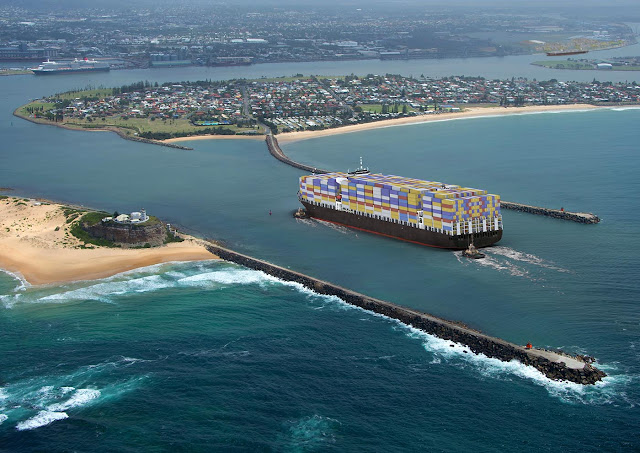 On 10 December 2018,  the ACCC (Australian Competition & Consumer Commission) announced that had instituted proceedings in the Federal Court against NSW Ports Operations Hold Co Pty Ltd and its subsidiaries Port Botany Operations Pty Ltd and Port Kembla Operations Pty Ltd for making agreements with the State of New South Wales that the ACCC alleges had an anti-competitive purpose and effect.

“We are alleging that making these agreements containing provisions which would effectively compensate Port Kembla and Port Botany if the Port of Newcastle developed a container terminal, is anti-competitive and illegal,” said ACCC Chair Rod Sims.

"Businesses in Newcastle, Singleton, Tamworth, Gunnedah, Port Macquarie, Kempsey, Liverpool Plains and Narrabri can look forward to savings of more than $500 per standard container, if they shipped their goods through Newcastle rather than Port Botany or Port of Brisbane," Mr Carmody said.

With these actions, the originally secret agreements preventing the Port of Newcastle competing against Port Botany and Port Kembla in the container trade finally entered full public gaze. It had been some time coming.

In April 2013, then NSW Treasurer Mike Baird announced that a consortium, NSW Ports, had agreed to pay $4.31 billion for for a 99-year lease over Port Botany with a further $760 million for a similar lease over Port Kembla. After net debt was repaid, the net proceeds of $4.3 billion would be funneled into the state government's investment fund, Restart NSW. There would  lso be an annual lease payment of $5 million to the government.

What was not said at the time, was that a commercial agreement provided that the State Government would provide a financial reimbursement to NSW Ports should container traffic at the Port of Newcastle pass a certain trigger point.

Just over twelve months later, now Premier Baird announced that a 98 year lease over the Port of Newcastle, the world's biggest coal port, had been sold for $1.75 billion. Of this amount, $340 million would go to Newcastle projects to aid the city's revitalisation.

The sale agreement included a clause that the new owners would have to reimburse the NSW Government should container traffic trigger the compensation clauses under the original agreement for the sale of Ports Botany and Kembla. The effect was to make a new container terminal un-economic.

The original agreement would appear a restraint of trade designed to maximise the sale value of the southern ports. I know of no evidence to suggest that the potential adverse effects on exporters across the broader New England were even identified, let alone discussed in the context of the sale. It is only now that we are starting to get the data to assess the economic costs to the North of Sydney's decisions.

My slow posting reflects my personal preoccupations. The problem is that while I have been preoccupied, issues have arisen, decisions are being made, that will adversely affect New England. In each case the adverse affects come from the simple fact that people don't recognise our existence. To illustrate this, I thought that I would simply list a few examples without great detail.

A few things to remember in considering the examples I will be citing:
Now for my brief points. I will give links later.

When you look at the Commonwealth Government's regional university initiative, it is concentrated in the outer metro rim and South Eastern NSW. There is almost nothing for New England.

When you look at the the NSW Government's regional development and tourism strategies, they have a bias towards Southern NSW.

When you consider the discussion on infrastructure, the focus is on metros or links between the metros. There is very little that will benefit New England

When you consider the new discussion on migration and decentralisation policy, not only is there little recognition of the history decentralisation policy, but the discussion focuses on growing the metro rim to abosrb more people. They talk about state based migration policies, but that won't help us because me have no state. The question of achieving better population balance within New England does not come up because New England does not exist.

While I have been absorbed on other things, the policy discussion has taken off in ways that will leave us worse off.