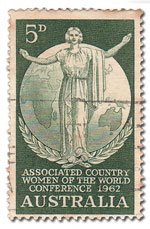 A friend and colleague Noric Dilanchian sent me photographs of two stamps from his collection and challenged me to write stories about them. This is the first story.

The pictured stamp celebrates the 1962 Associated Country Women of the World Conference.

The CWA is the oldest and largest organisation representing the interests of country women. The NSW and Queensland Branches of the CWA were formed in 1922, followed over the next fourteen years by each of the other states and the Northern Territory. A national association was formed in 1945.

She points out that the public picture of life in country Australia in 1922 was dominated by men. There are glimpses of women, but the stereoptype of the outback wife was very much a background figure - "a stoic little woman, fighting behind her man through drought, flood, fire and economic hardship" (p1).

Helen also notes that most Australian's picture the country woman as the wife of a grazier or a wheat farmer. But country women also included the wives of shearers and farm labourers, small farmer's wives, village and town women, wives of railway workers, aboriginal women. Religions, beliefs, life experiences and standards of living varied tremendously, but all shared certain common problems.

Unlike New Zealand which quickly developed a relatively large number of larger urban centres with significant facilities, the Australian population was much more dispersed, even the larger country centres much smaller than their New Zealand equivalents. When David Drummond, the member for the Northern Tablelands, visited New Zealand in the 1920s he was astonished at the decentralised nature of the population, at the size of communities compared with New England.

Geoffrey Blainey suggested in Tyranny of Distance that this dispersed pattern was a natural outcome of Australia's geography. I have suggested that at least in New England's case, issues associated with the centralisation of economic and political power were important.

Whatever the reason, the dispersed population structures created specific problems for country women in New England and other parts of NSW. These problems were compounded by another feature, the very much larger number of small farms and small to very small farming and mining settlements then as compared to now.

This population structure meant that there were many women remote from each other on farms, others with at least female companionship nearby but distant from the nearest reasonable size town, still more distant from Sydney its greater facilities.

By 1922 cars had started to spread following the development of the cheap and durable Model T Ford by Henry Ford in 1909. In 1915 15,000 cars were imported, of which 10,000 were Model Ts. But while cars were spreading, ownership was limited, with most country families still relying on horses in one way or another over rutted country roads. Those needing to go beyond the nearest town to Sydney or Brisbane then faced a long train or sea trip.

Illness or accident were common, community support structures were limited, leaving women and children especially vulnerable. Helen Townsend quotes one farmer's plea from 1922: "My wife is dying before my eyes . . . . we can't get help for her. She won't leave me and the boys and take a spell in the city."

These needs drove the early founders of the CWA.

From Easter 1922 as branches formed across the state, members decided that they needed somewhere to meet. This lead to the progressive creation of CWA Rest Rooms, places where women could meet, have a cup of tea, feed babies. These Rest Rooms also became a valuable facility for community meetings. It is hard today to realise just how important all this was in days when a trip to town was a major all-day event, when basic facilities for women (men at least had the ubiquitous pub) were lacking.

All this development had to be funded. CWA branches ran a variety of fund raising activities including catering for a variety of country and town events, in so doing adding further to the fabric of community life.

In all, the organisation was an enduring success. So, Noric, your stamp has given me an excuse to at least sketch another element in the New England experience.
Posted by Jim Belshaw at 3:27 pm

Interesting organisation the CWA but I wasn't aware of their international links. The literature on feminist internationalism doesn't mention them. I remember they used to have an office in Castle Hill, long gone.

Geoff, I did not know that the literature on feminist internationalism did not mention them. Perhaps that's not surprising.

The CWA began as an organisation dedicated to supporting women and meeting specific community needs. There were a lot of very powerful women, powerful in a personality sense, but they did not want to change the social structure as such. By the sixties and seventies the CWA was seen as socially very conservative, almost the enemy to the feminist paradigm.