New states, history and the sense of New England identity 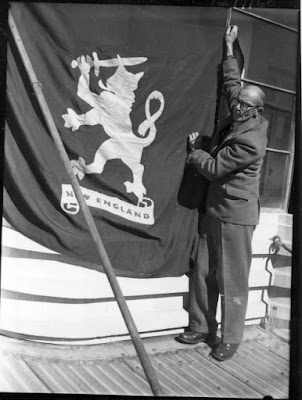 Senator Matt Canavan has again raised the new state cause. This led to a small media flurry. In discussion, Mitchell wrote: Unfortunately aussies hate change. The attitudes in the comment threads from news posts is really disheartening. I responded:

Don't be disheartened, Mitchell Nicholas Ophir. We have been going for almost 160 years and have always failed. Out of that failure we have created national parks, teachers colleges, universities, books schools, political traditions, intellectual traditions. We have influenced politics and thought. We are playing a long game. The institutional barriers are such that without physical insurrection, success is hard. But we are fighting for our own history and the things that we have achieved. That's not all bad.

In this short post, I want to reflect on what I said to Mitchell.

A lot of the discussion on constitutional reform in Australia is phrased in abstract terms set within the frame defined by the current constitution.

Some argue for the abolition of the states with, in some cases, their replacement by regional councils. This is extremely difficult for it requires a fundamental change to the existing constitution, Others argue for a restatement of relations within the current constitution to return powers to the states. That does not affect the constitution, but is extremely difficult because Federal governments of any persuasion are reluctant to give up real powers, the states suspicious of change in circumstances where final financial control rests with the Commonwealth.

At this level, the new state movements are a little different because they argue for smaller units related to geography within the existing constitution. That constitution provides for the creation of new states. The impediment is not the constitution, but the unwillingness of existing states to see their territories subdivided.The problem is political, not constitutional. However, because of the nature of the political opposition, the new state movements have argued over time that the constitution should be amended to allow the inhabitants of particular areas to gain self government through some form of popular expression that would override the opposition of the state in question. This is a difficult ask for it requires constitutional change that would, effectively, be opposed by all existing interests.

The nature of the problems involved leads to depression. Why bother when the cards are stacked against you?  However, it's not quite as clear-cut as that.

Since the separatist cause first emerged in the lead up to the separation of the Moreton Bay Colony, now Queensland, it has been riven by divisions. At the beginning, it was the division between squatters and small farmers and towns' people, between those saw either joining with Moreton Bay or the creation of a new colony as a way of meeting labour shortages through continued convict importation and those who were opposed. A little later, it was the towns' people who became the separatists because they saw the return from land sales in their area all spent in Sydney.

As the decades passed. as the agitation rose and fell, the composition of those opposed and those supporting shifted depending on the circumstances of the time.In 1967 when the question was put to plebiscite, the vote was lost 53% to 47% with the no vote concentrated in the Newcastle and coal fields electorates, in the southern dairy farming electorates. The first group feared Country Party domination in the new Parliament, the second loss of preferential access to the Sydney milk market. Economics and party politics are always important.

Two things happened in the midst of shifting agitation and alliances. The first was the creation of a sense of Northern identity, a recognition that the North had its own history and interests. The separatists campaigned for the North, stated that the North was different, an entity. The North did indeed have its own identity based on history and geography, but the campaigns emphasized that  separateness. The second was the establishment of a clear relationship between the rise and fall of new state agitation and the public and political recognition of New England as an entity that had to be taken into account, that could not be ignored, that had to be satisfied in some way.

Since the plebiscite loss, that sense of New England identity has declined. Further and unlike North Queensland where distance from Brisbane has maintained the sense of separation, New England has become increasingly fragmented between the growing metros of Sydney and Brisbane. And yet, history and geography have both ensured a continuation of that sense of Northernness.

In my comment to Mitchell, I said that we were fighting for our own history. Many, even in the North, would deny that we have our own unique history or would say that it's just not important in the changing sweep of Australian history. Each region of New England has its own history, but sitting on top of this, integrating it, is a Northern history.

I write the weekly history column for the Armidale Express. I know from talking to people that the sense of Northern history, even New England Tablelands' history, has declined relative to local history. The sense of identity, of interconnection, has diminished.

When we talk about the fight for self-government we are not just talking about a constitutional battle, we are not just talking about the fight for political and economic recognition, we are actually fighting for the continued recognition of our story as something important and worthwhile. This holds for the North in general and for the different parts of the North. We have our own narrative and that's worth preserving.

New England's Aboriginal peoples talk about sense of country, of the importance of linkages between present and past. They have very particular reasons for emphasising that, but it's true for the rest of us as well. That is what we are fighting for, not just for self-government as such.
Posted by Jim Belshaw at 9:06 pm

your blog is much appreciated...
Chowirnghee Lane