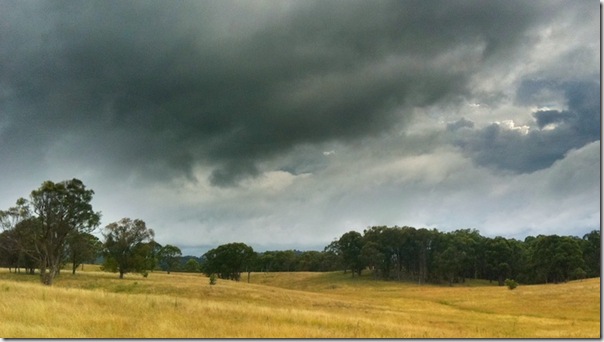 In Belshaw's World - Tough rental market to crack I mentioned the turmoil of moving. Well, that continues. I write with boxes around me, desperately trying to get ready for a Tuesday move.

The move is making it hard to do anything productive, especially anything that involves extended writing.

In the meantime, a photo from Gordon Smith's photo blog to continue my interest in the colours of New England. I have been writing a fair bit on southern New England issues; this photo moves my focus further north.

Gordon has called the photo simply Stormy Morning. For those who don't know New England, this is a very typical scene from the Tablelands that form the core of New England. New England itself, or the North as it is also known, is made up of the Tablelands, the largest in Australia, and the rivers and river valleys that run to the west, north, east and south from those Tablelands. While people disagree on the exact boundaries of the North, all the various definitions centre on the Tablelands and the rivers.

I said colours of New England. Here you have the yellow gold grass, the olive trees and a hint of blue hills in the background. The dark colours of the sky and the gold of the grass dominate the picture.

This is my personal home country. Living as I now do in Sydney as part of the diaspora, the photo brought back many memories.

Looking back over the photos and writing on this blog, it would be nice at some stage to do a proper photo essay or book on the broader New England combining photos and photographers, writers, painters, film and a bit of history, something that shows the gradations of landscape and colour and the way that has affected life including the built environment.

Given how far behind I am on my existing projects, that will have to wait. In the meantime, I can at least share with you the colours of New England.

Quite a dramatic sky.
Sydney - City and Suburbs

I thought so, too.