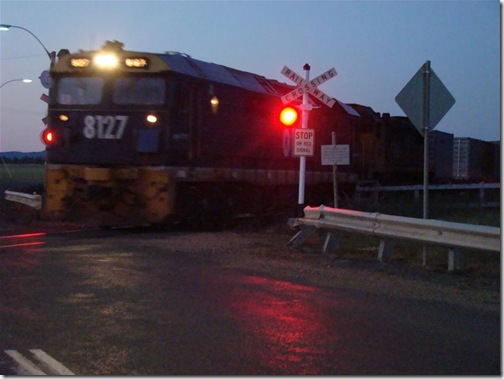 I see from ABC New England North West that Anthony Hardwick has organised a petition to the Queen to draw attention to the rail situation on the Tablelands and North West.

Now Her Majesty will not able to help because this is matter for her NSW Government. However, I do have a great deal of sympathy for Anthony's desire to attract attention to the issue.

Unlike other states such as Queensland, Sydney's approach to its rail system is narrow, pedestrian and boring. I am not saying that Queensland is perfect, far from it because it suffers from some of the same problems as NSW. But it has promoted its railways as more than just transport.

In posts and in comments on this blog, some of us have discussed ways in which New England's railways present and rebuilt, might be used to more effectively to link and promote New England. I wonder what you think? What would you like to see done?

Jim, this is an issue of real significance.

Railways are more than just passenger and freight transport. They are a tangible and indelible link between communities.

Take for example Newcastle and Dubbo. No such direct rail link exists, you must travel via Sydney. That's a 7 to 8 hour journey (ignoring changeover time). Freight between the cities would simply not be viable. Yet with a direct link the journey time would be at least halved and Newcastle would be the obvious export port for central and north west production.

A direct rail link to Scone and the north from Dubbo would also open up so many more possibilities for the Central West and the North of NSW - it just makes so much sense. Yet here we are in the 21st Century without even such a connection.

And if we dare to be just a little progressive and imaginative - a fast train service between say Armidale and Newcastle, or Coffs Harbour and Newcastle would reduce travel times to perhaps less than 2 hours instead of 5 hours plus. New England would be a viable integrated entity instead of just some communities loosely connected by common geography.

Good northern rail links, with all of the accompanying economic benefits, are unlikely under Macquarie Street rule. A northern focus is needed.

Jim, also New England has the foundation of an international airport at Williamtown just north of Newcastle. It could (and should) be the obvious international gateway between New England and the rest of the world.

With good rail connections most of the population of New England would be perhaps no more than two hours commute to an international air terminal.

In fact, it should be the aim of a New England government to make fast train services no more than 1/2 hour drive from 80% of the New England population. That is not an unrealistic goal. It would put 1.2 million people within a couple of hours commute of each other. I have no doubt that New England regional development would lead the nation.

Leaving aside any local environmental concerns, I don't have the local knowledge to comment on these, I have long been of the view that Williamtown should be developed into a proper international airport.

I see this as one building block in a development strategy that would draw New England people to Newcastle rather than Sydney. For example, many medical services could be provided there. But there has to be ease of transport. That means feeder plane services.

The rail suggestions are interesting. It's very easy to say why things might not work. Part of the reason for our own state is the capacity to dream, to create new visions.

We are all stuck at present on what is. The $400 million wasted on the Sydney metro might not build the new lines, but it sure as hell would have funded a lot of studies on what might be!

I will pick your comments up later in another post. In the meantime, others might have additional comments.

Interesting that you should touch on medical services, Jim. My view is that good medical services should be no more than 2 hours from 80% of the populace. That might mean, for example, that cancer units be established at say Singleton, Port Macquarie, Tamworth, Coffs Harbour and Grafton. Also burns units at say Newcastle, Coffs Harbour and Armidale.

It is important that people should be able to receive services close to home and that relatives can visit regularly without having the costs of staying overnight in a remote city.

I have personal experience of this as I had a daughter in the RNS burns unit about 2 years ago. That was fine for me since Newcastle is only 2 hours drive from St Leonards. However, if I was much further north it would have required the prohibitive cost of overnight accommodation in Sydney. That is just not acceptable.

Also, by decentralizing services there is the double benefit of reducing pressure on the metropolitan units as well is encouraging people to relocate and/or stay in regional centres where opportunities might be improved with the flow on economic benefits to the local regional community.

Our brightest and most gifted people should be able to follow their career paths close to home rather than having to move to a remote capital. Also our regions should not be forced to lose that talent and the economic benefits that home services would provide to their community.

You are talking to the converted here Greg! Back in 2007 I did a post on one aspect of this - http://belshaw.blogspot.com/2007/07/mr-howard-mr-brough-and-australias_14.html.

You don't have to look far in this sad state to see a crumbling rail corridor. Where I work in the western suburbs of Newcastle, I get caught in traffic from Wallsend to Newcastle. I also drive along the old railway line that once serviced those areas. This example is of a railway project that is easy to justify on a cost/benefit analysis and would appeal to the general public along its route.

Trans-New England railways would also appeal to New Englanders and connect them in a way that appeals to the ever increasing enviromentally aware population. Not only for enviromental benefits but also for broader tourism within the regions. Old railways can be revived as an alternative to heavy road haulage.

At the same time, as Greg suggested, railways can provide an efficient transport link to existing air infastructure such as Williamtown.

On the other hand, we need to be realistic with rail projects as the cost must balance real world benefits.

A great way to draw attention to local issues by petitioning the Queen.

The story highlights what local people want for their areas. As our numbers grow, so can more and more ideas for important infastructure projects grow. Rather than have individuals simply criticise what the Sydney goverment does, we will have a movement full of like minded people with real alternatives with local benefits.