I suddenly realised that I haven't done a news round-up on New England's universities since February. It seems an opportune time to do so now, for as I wrote in Are the wheels starting to come off in Australian higher education?, all Australia's universities face a period of fundamental change.

Starting with Newcastle, on 25 June the University released details of 901 mid year offers of places broken up as follows:

I haven't been able to find equivalent numbers for UNE or SCU.

On 1 July, more than 2,000 students from high schools across the Hunter, Central Coast, mid-north Coast and Tablelands-North West regions visited the University of Newcastle's Callaghan campus for the annual Schools Visit Day. This type of visit is a major activity for all our universities as they seek to attract students.

One of the drivers here has been the high cost of rented accommodation for students within Newcastle. Sydney universities face similar if more intense problems; both the University of New South Wales and Sydney University are expanding student accommodation, increasing their competitive threat for New England students.

One of the University of Newcastle's strengths lies in the engineering and technical arena. In this context, the University has appointed engineering heavy-weight Dr Alan Broadfoot as the director of the Newcastle Institute for Energy and Resources (NIER).

NIER will comprise laboratories, workshops, offices and five industrial-scale pilot plant workshops. The facility will encompass University Priority Research Centres and research groups that will explore energy production, distribution and efficiency. Research will also be carried out in the areas of mining, minerals and minerals processing. The $40 million NIER project is funded through $30 million from the Australian Government Education Investment Fund and $10 million from the University.

In another move, the University has announced that Researchers from the University of Newcastle will lead a new multi-million dollar Australian Research Council Centre of Excellence to pioneer new scientific approaches to geotechnical engineering design. With Australian Government funding of $14.4 million, the Centre of Excellence in Geotechnical Science and Engineering will focus on creating science-based tools for predicting the safety of offshore and onshore geostructures, including oil and gas platforms, roads, railways, tunnels, dams and port facilities.

Finally on Newcastle, congratulations to The University of Newcastle Chamber Choir for winning gold in two categories at the Sixth World Choir Games in Shaoxing China. Around 420 choirs with over 10,000 performers from some 80 countries participated in the Games. 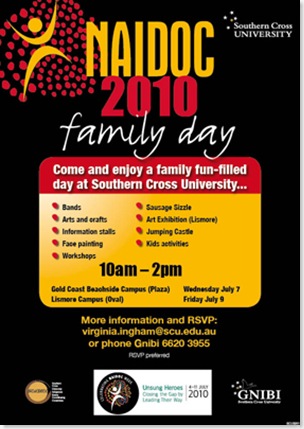 Both Southern Cross and the University of New England featured NAIDOC (National Aboriginal and Islander Day Observance Committee) week activities. NAIDOC takes place across Australia during the first full week of July  and is a celebration of Aboriginal and Torres Strait Islander cultures and an opportunity to recognise the contributions of Indigenous Australians in various fields.

At SCU, there were a variety of activities at the Lismore and Gold Coast campuses (and here), while at UNE the Oorala Aboriginal Centre organises a flag-raising ceremony every year as part of Armidale’s NAIDOC Week celebration.

Speaking at the ceremony, student Kerrie-Anne Maunder celebrated the achievements of her grandmother, Vilma Ryan, as a political activist, community worker, lecturer, and campaigner on a wide range of Aboriginal issues including land rights, social equity, and the education and welfare of children.

Ms Lyn Walford, representing the local Aboriginal community, spoke about the highly successful, community-based Aboriginal Rugby League team based in Armidale - the Narwan Eels - as “unsung heroes”. She invited those at the ceremony to view an exhibition of photographs and memorabilia of the “Eels” on   display in the Oorala Aboriginal Ce 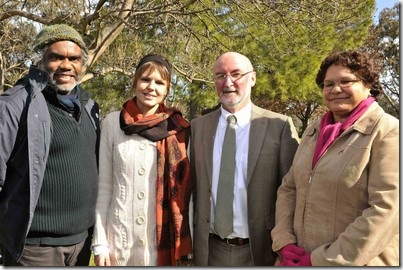 ntre while continuing their NAIDOC Week celebration over morning tea.

New England has a very big Aboriginal community and especially in the North Coast and North West regions.

While I have always been interested in Aboriginal history, working with Aboriginal people over 2009 while also researching Aboriginal history as part of my broader history of New England has given me a much greater awareness of Aboriginal issues; see Return to country as an example.

Staying with Southern Cross, one feature of the University's press releases is an emphasis on the sea, not surprising given its location. Examples include:

I sometimes not sure just how many New Englanders understand the importance of their universities to development across New England.

Turning to to UNE, the press releases again have a different feel. Monitoring the releases as I do, by the way, UNE actually has the best PR approach of all three.

If Newcastle is technical and industrial, Southern Cross sea, then UNE is agriculture. Of course, all three are more than this, but the rural side continues to come through strongly at UNE as it has from the University's early days. If we look at the media releases over July, we find:

However, looking at the pattern of press releases over time, UNE also has four distinctive features as compared to both Newcastle and SCU: the releases are more varied, while there is a greater emphasis on campus life, on international reach and on the humanities.

This partially reflects the University's history, but also its strategic positioning, for in some ways UNE is caught between a rock and a hard place.

Australian university students are far more stay at home than, say, their US equivalents. Lacking the bigger immediate local catchment areas available to Newcastle (Newcastle, Lower Hunter and Central Coast) or Southern Cross (Gold Coast, Northern Rivers, Coffs Harbour), UNE has to attract students and especially on-campus students from other places in the face of fierce competition. While UNE does compete with SCU and NU for New England students, it actually has to attract students from other places who would otherwise go to their local university or universities. This affects every element of the University's competitive strategy.