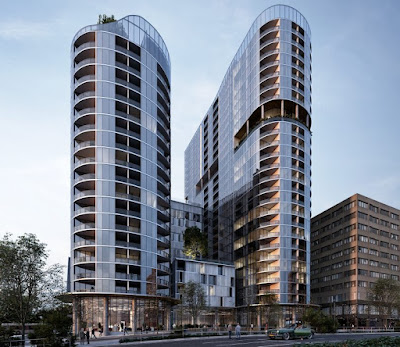 In December 2016 I examined the Ernst & Young cost-benefit evaluation of the proposed move of the Australian Pesticides and Veterinary Authority (APVMA) from Canberra to Armidale.

For a variety of reasons, including time and the rapid unfolding of events I did not follow up. Now I want explore one element of what I was going to say, the implications of Canberra's continued growth. The trigger here was a 27 May 2019 piece by Katie Burgess, The areas in Canberra flagged for intense urban infill. To quote from one part of the article.

Around 100,000 new homes will need to be built between 2018 and 2041 to meet that demand, the planning strategy says, equating to nearly 12 new homes a day. Canberra Times

While many factors have contributed to these trends, the single over-whelming one is the decision to establish a capital at Canberra.

Now for all the hyper-ventilation in the Canberra Times over the APVMA move, you can see that it has negligible impact in Canberra beyond a marginal reduction in the growth pressures facing the city, a marginal reduction in the new infrastructure spend.required to  ease growth pressures. For Armidale with a population around 24,500, the move is relatively more significant, but can still be absorbed without requiring additional infrastructure.

I now want to broaden my focus a little to bring in the remainder of New England, Hunter to the border by considering the dynamic effects of Canberra's growth, .

When I moved to Canberra, the trip to Sydney along the narrow highway took over four hours. Now it's down to three hours on the expressway and will shorten. Along that highway strip, the expansion of both Sydney and Canberra is slowly crawling towards each other, creating a single conurbation. The establishment of fast rail, this seems likely, will accelerate the trend. A Sydney-Canberra-Melbourne fast rail would further consolidate the dominance of the South-East.

I remember the first grapes being planted around the ACT. Now the growing Canberra market, the most affluent marketplace in the country, has provided a base for rapid expansion that in turn draws visitors and adds to the tourist trade. While parts of the country are experiencing some rural depopulation, Canberra people are moving out looking for new experiences. Then down on the South Coast, Canberra is driving the development of coastal tourism.

This southern growth process is being further driven by other factors. Wagga Wagga, one of the fastest growing cities in regional NSW, is only a bit over two hours from Canberra. Albury-Wodonga is a bit over three hours from Canberra, about the same from Melbourne. Further north, the line from Sydney to the Blue Mountains to Bathurst to Orange is another growth line. Bathurst benefited from early NSW Government shifts in public administration, while both Orange and Bathurst have benefited from relative closeness to Sydney facilitating weekend traffic and the growth of food and wine. Both Orange and Bathurst are presently a bit over three hours from Canberra.

I haven't attempted to fully analyse the way all these bit fit together, but perhaps i can use an example to illustrate, The growth of Charles Sturt University has been solidly based on its expansion in the regional cities of Southern and Central NSW.

If we now turn to New England, we find a very different picture. In the south, the growth of Newcastle has been influenced by the growth of Sydney. In discussions including discussion on "regional development" Newcastle is often seen as an out-rider, a place to absorb Sydney population pressures. The linkages that once existed between Newcastle and the broader North have diminished to the detriment of both, in part because of the southern focus.

In the far north, the rapid population growth in the Tweed Valley and, to a degree further south, have been driven by the growth of the South East Queensland urban conurbation, creating a degree of isolation and dislocation. Along the coastal strip between the Hunter and the border, the rapid increase in population associated with sea change including retirement brought people but largely without jobs beyond service jobs. Of course there are some pluses, but now these are some of the lowest income areas with some of the highest youth unemployment in the country. Unlike the growth  high income Canberra, the growth of say Coffs Harbour has had very few broader spin-off benefits.

I find it interesting that the biggest infrastructure issue on the North Coast, the re-development of the Pacific Highway, is focused on a road whose primary purpose is to link Sydney and Brisbane. Of course it's important because the congestion on that road from through traffic has caused deaths and great local inconvenience. You can see why locals are concerned.But it's not actually going to add any new jobs of the type the coast needs.

Inland, the towns and cities have been struggling just to hold. Growth has increased, but the puffery associated with each town's boosters with their local focus sets towns against each other. Armidale wants the APVMA. The Mayor oft Tamworth was critical because Tamworth needs jobs and this is special pleading for Armidale. Tamworth wants a university campus, its the only city of its size in NSW that does not have an equivalent. I don't see Armidale Council rushing to support.

Meantime, the North's relative decline continued. This will continue until the North starts focusing in a more integrated way on cross-linkages and mutual support. Take the dynamic effects of the APVMA re-location as a simple final comment.

The E&Y study compared the local expenditure benefits by comparing the whole ACT with the then Armidale Dumaresq Council area. The ACT benefits would be greater because more of the flow-on effects would be retained there as compared to to the Armidale Dumaresq LGA. Let me turn that on its head. The dynamic benefits will be greater in Armidale just because the benefits from the spend will flow onto a wider area. That includes expenditure in Tamworth and on the coast.

Huge issues at every level here Jim up to and including Public Policy, where to start to unwrap it all. At the local level of Coffs Harbour my observation is that growth is seen in terms of real estate development, tourism and as a retirement destination. Basically more Barista jobs in a part time employment economy. The expansion of the blueberry industry is generating an ever growing demand for labour supplied by Visa which in turn is driven by seasonal harvesting. There has been expansion of higher order employment by the State Government expanding Coffs as a regional service access point but when you look more closely much of this expansion has been to the detriment of Grafton the historical point of access to Govt services. I have also noticed that commercially Coffs and I assume further North now look increasingly to Brisbane, more so than Sydney, so we are seeing changing hinterlands that ignore State Borders. You also referenced E & Y and their work, my first thoughts in these cases are ‘What instructions did the client give?’. I also notice that wherever you look in Public Service now you will find one or more of the Big Four contracted in as Consultants, I had never realised that Accountancy was so developed in its expertise in so many specialist fields of service provision. Your article prompts a reply as long as the original but I will con5ain myself to your relief.

Sorry for the delay here, John. You make good points. The Gov service reach extends inland as well to some degree and it has been offset by job losses elsewhere. I feel a bit sorry for Grafton, I have to say and also Lismore. Interesting comment on Brisbane's growing reach. That can only increase, I think, as the Pacific Highway gets better. As a matter of curiosity, how much inland news reaches Coffs? Or how many people go inland? I have the strong impression that the linkages are now very week.

Judging from the local Press and TV News, very little. Inland news only seems to reach us via a National News report when disaster in its many forms strikes. I don’t have personal knowledge of daily traffic flows on the Gwydir Highway but when I have travelled on it to access the Old Glen Innes Road Copmanhurst or the Orara Way to travel back down to Coffs or or use the Armidale Road up to Ebor there appears to be only local traffic.
Any branding on trucks and vans tends to be coastal until you actually get up onto the tablelands at Ebor or Dundee when it changes as you would expect. The Waterfall way is very busy to Bellingen, the traffic then falls of but remains busy up the Mountain, but not all that traffic passes through Dorrigo, many turn into the National Park before Dorrigo then head back down the mountain. Heavy traffic is taking its toll on the Mountain road as it was not constructed to carry such weights on the outside edge. It currently has a traffic lights one way section due to a road collapse and if you are observant you can see more to come. The bulk of this heavy truck traffic is locally generated between Dorrigo and Ebor but with some, particularly livestock coming from further West. Going South from Waterfall Way there is nothing practical until you reach the Oxley Hwy, the significant traffic there is commuter traffic flows between Wauchope and Port M. There remains significant numbers of Western families who travel down to the coast for holiday breaks at different times of year.

Thanks, John. This was a helpful comment. I will use it as the base for a post(s)

I'm Абрам Александр a businessman who was able to revive his dying lumbering business through the help of a God sent lender known as Benjamin Lee the Loan Consultant. Am resident at Yekaterinburg Екатеринбург. Well are you trying to start a business, settle your debt, expand your existing one, need money to purchase supplies. Have you been having problem trying to secure a Good Credit Facility, I want you to know that Mr Benjamin will see you through. Is the right place for you to resolve all your financial problem because am a living testimony and i can't just keep this to myself when others are looking for a way to be financially lifted.. I want you all to contact this God sent lender using the details as stated in other to be a partaker of this great opportunity Email: lfdsloans@outlook.com  Or  WhatsApp/Text +1-989-394-3740.

Very interesting esp to someone who spent a few years in the Town and surrounding area.

To a youngster in the 1950's Tamworth appeared brash,slightly rough,commercial ,not intellectual ,but appeared more dynamic than Armidale which seemed smug, genteel but was perhaps not ,definitely cliquey to visiting seasonal workers of which my shearer father was one,thought it was the intellectual centre of the north ,and had an active association for the Assimilation of Australian Aborigines (did any of the University types bother to ask the local aborigines what they wanted?).

Armidale wasn't all intellectual.In the late 1940's a hall on the opposite of the Minto where dances were held for members of the working class on a Saturday night (I think),was known as the "Homewreakers".

Armidale often reminded me of Toowoomba (churches,schools,geographical location of business centre )and the same deadness especially during the winter -rip up the deciduous trees and plant non-deciduous.Blighty is long gone.