Port of Newcastle. another example of the malign impact of Sydney centric decisions that ignore the North? 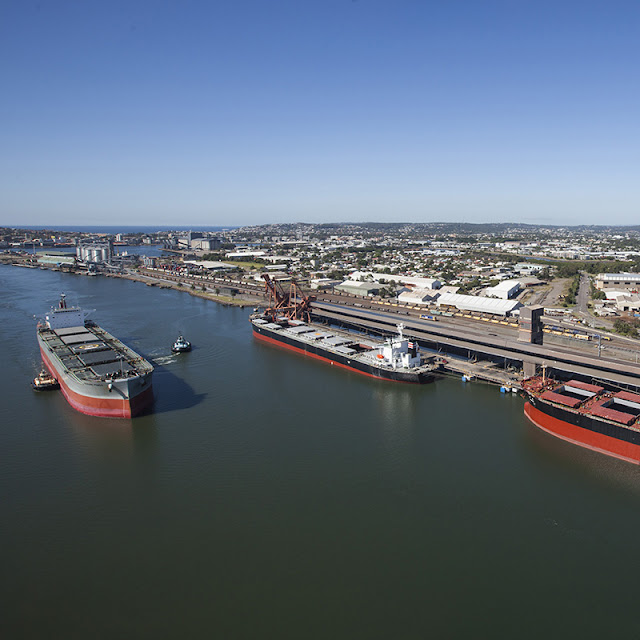 Port of Newcastle. another example of the malign impact of Sydney centric decisions that ignore the North?

I first reported on the proposed sale of the Port of Newcastle back on 28 January 2014: Competition heats up for Port of Newcastle. It was only a very brief note in which I said that there appeared to be little opposition to the sale within Newcastle, perhaps because part of the sale proceeds was to be allocated to Newcastle infrastructure. Even then, I was quickly corrected when regular commenter Greg wrote :

"Actually Jim, there has been a fair amount of opposition in Newcastle. The port of Newcastle is substantially different to both Port Botany and Port Kembla in that the government would not be selling a business so much as a) a tax stream (ie. charges for use of the port facilities) and b) an awful lot of prime harbourside land which will severely restrict what can be done on and around the harbour for the next century. In particular, a container terminal was promised for the port a decade ago. That would have been logical to service the north of the state and help relieve congestion around Port Botany. This government has canned that and it is likely that the sale of the port will see hopes fade of a container terminal ever being built in Newcastle.

There is also resentment that the money for infrastructure in Newcastle is tied in to the port sale, yet the dollar figure is set in stone. If the port gets sold for closer to say $1bn (highly likely), Newcastle won't see a zac more than that already promised from the sale. The state has made that absolutely clear. I don't think that there are too many people who believe that it is a good deal for Newcastle. The sale of the port will benefit Sydney more than it does Newcastle."

In April 2014, then NSW Premier Baird announced that a 98 year lease over the Port of Newcastle, the world's biggest coal port, had been sold for $1.75 billion. Of this amount, $340 million would go to Newcastle projects to aid the city's revitalisation. So it was sold for much more than projected, with just under 20% going to Newcastle projects.

What was not known at the time was that previous sale agreement of the leases to NSW Ports over the southern Port Kembla and Port Botany provided that the State Government would provide a financial reimbursement to NSW Ports should container traffic at the Port of Newcastle pass a certain trigger point. This clause was inserted to maximise the immediate cash to the Government in Sydney. The subsequent sale agreement for the Port of Newcastle included a clause that the new owners would have to reimburse the NSW Government should container traffic trigger the compensation clauses under the original agreement for the sale of Ports Botany and Kembla. The effect was to make a new container terminal un-economic.

These restrictive practice clauses were confidential, but inevitably peaked into the public domain. partly because the Port of Newcastle began to seek to develop a container port

On 10 December 2018,  the ACCC (Australian Competition & Consumer Commission) announced that had instituted proceedings in the Federal Court against NSW Ports Operations Hold Co Pty Ltd and its subsidiaries Port Botany Operations Pty Ltd and Port Kembla Operations Pty Ltd for making agreements with the State of New South Wales that the ACCC alleges had an anti-competitive purpose and effect. “We are alleging that making these agreements containing provisions which would effectively compensate Port Kembla and Port Botany if the Port of Newcastle developed a container terminal, is anti-competitive and illegal,” said ACCC Chair Rod Sims. The following day, 11 December 2018, the Port of Newcastle released a commissioned report on the economic impact of a container terminal at the Port of Newcastle. This suggested (among other things) that a modern container terminal would cut land transport costs for northern NSW businesses by $2.8 billion by 2050. This would, according to Port of Newcastle CEO Craig Carmody, increase exports from Northern NSW including the Hunter by $1 billion by 2050 "Businesses in Newcastle, Singleton, Tamworth, Gunnedah, Port Macquarie, Kempsey, Liverpool Plains and Narrabri can look forward to savings of more than $500 per standard container, if they shipped their goods through Newcastle rather than Port Botany or Port of Brisbane," Mr Carmody said.

With these actions, the originally secret agreements preventing the Port of Newcastle competing against Port Botany and Port Kembla in the container trade finally entered full public gaze. It had been some time coming.

On 10 November, 2018, a month before the ACCC action, the NSW Public Works committee established an inquiry into the matter. It's terms of reference were;
"1. That the Public Works committee inquire into and report on the impact of Port of Newcastle sale arrangements on public works expenditure in New South Wales, including:

(a) The extent to which limitations on container port operations currently in place following the sale of the Port of Newcastle contribute to increased pressure for transport and freight infrastructure in New South Wales, specifically:
(i) the Westconnex Gateway project (ii) the Port Botany Rail Line duplication
(iii) intermodal terminals and rail road connections in southwest and western Sydney
(iv) other additional public road infrastructure requirements due to the additional road freight movements in Sydney under the existing port strategy.

(b) The nature and status of the port commitment deeds, the extent to which they contain limitations on container port movements, and the terms and binding nature of any such commitments.

(c) The extent to which container port limitations contribute to additional costs for NSW industries who are importing or exporting from New South Wales, especially in the Port of Newcastle catchment.

(d) Any other related matters.

The committee members were:
The Committee reported on 25 February 2019. It found:
:
It recommended:

I am still working my way through the analysis, However, some things stand out. Note that I am looking at the report from a Northern NSW, a broader New England, perspective. I make no apologies for that.

The analysis is very Sydney centric. I have seen this type of analysis before dating right back to the Cohen Commission inquiry into a proposed Northern state. There the analysis focused on railways, the apparent economies associated with the Sydney port rail network and the additional costs associated with developing an alternative system. Leaving aside costing and pricing issues, the way that then NSW rail freights were set provided an artificial surplus to the Sydney railway network carrying Northern good that then became a cost, the analysis was based on what was not what might be.

I thought that was the case here too. It is heavily set within existing plans, existing structures. The Port of Newcastle is seen as an extension of the Sydney network and analysed in that context. In a way, the approach adopted by the Port of Newcastle in emphasising certain savings that would accrue to Sydney through (for example) reduced infrastructure spend encouraged that approach. Disprove those, or at least cast doubt on them, and the case starts to fall to ground.

Assuming that I understand the arguments correctly, the evidence ran that the majority of container traffic was Sydney bound and that, further, the economic locus was shifting to the south and south west, effectively isolating Newcastle, The argument here seems to have been two fold. That expenditure and planning should be focused on the existing infrastructure and that these trends made it unlikely that a container port at Newcastle could be viable.

I have commented before about the way in which present development dynamics are progressively disadvantaging and indeed fragmenting the North The evidence presented to the committee seems to support that view. However, the whole analysis misses certain key points.

The anti-competitive clause itself should never have been there in the first place. It artificially increased the price that was paid for the long term lease at the cost of the Port of Newcastle, Newcastle and indeed importers and exporters across Northern NSW who might have benefited from alternative shipping options. It also artificially increased traffic through the Botany Bay and Port Kembla, creating an economic incentive for further investment to manage the increased traffic.

In this context, and this in part reflects the way the committee's terms of reference were written., there is actually no recognition in any of this of the North as an economic and geographic entity with its own interests. How might we use a container terminal at Newcastle? How might we combine it with other infrastructure to encourage Northern development.? I think that these questions are worth asking.