The changing role of New England's Regional Galleries - a note 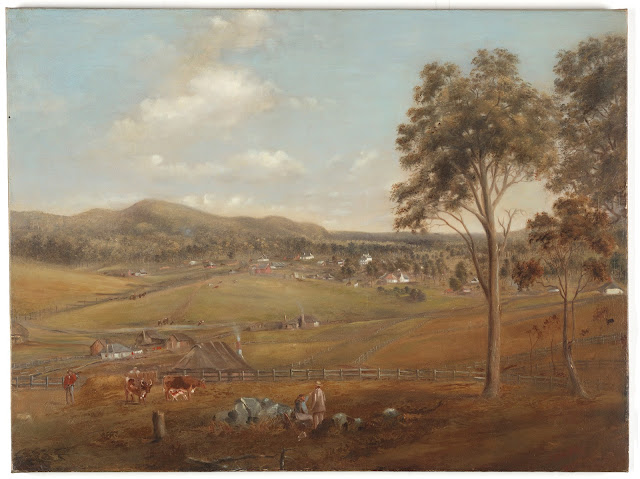 Robert Heather, former head of the New England Regional Art Museum and now Director Advancement, Communications and Events at the University of New England, kindly sent me links to paintings with New England connections. This is one of them.

The painter himself was something of a journeyman painter. Convicted of forgery and transported to Australia in 1832, Backler travelled widely across regional NSW and Queensland in search of portrait and landscape commissions. When he arrived in a town, Backler would advertise his services in local papers. He visited Tenterfield in 1860 on his way to Brisbane.

Backler's Tenterfield painting is one of those that the State Library Foundation is seeking sponsorship for to help conservation and preservation. Robert thought that it was a sufficiently important one in local terms that the need should be publicised. 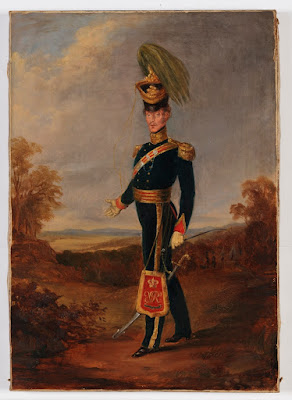 Digging through the paintings presented by the State Library for sponsorship, I realised that I had no idea of the depth of their collection nor of the number of paintings with New England connections. I found over 30 artworks with some connection to the broader New England. This is another example.

Now James Winniett Nunn of the NSW Mounted Police is quite an important figure in New England history for his role as officer in charge for the massacre of Aboriginal people at Waterloo Creek in 1838. I had never seen an image of him.


Robert's message came as I was reading Antipodean Perspective: Selected writings of Bernard Smith (edited by Rex Butler and Sheridan Palmer, Monash University Publishing, 2018). Smith, one of Australia's famous art historians, has been a favourite of mine for many years. He was the one who really introduced me to the history of Australian art around 1970, although I had had exposure before that.

Some of the early pieces in the book deal with Smith's views on the role of the art museum. Smith was a bit of an iconoclast, a man of firm views. He was concerned about the way that special exhibitions detracted from the gallery's primary collections. To his mind, a key role of the curator was to document and understand existing collections, to place them in context so that they became more broadly accessible. A policy that combined a focus on a limited number of special pieces with special exhibitions meant that the total collection gathered dust.

While Smith compared the failings of Australian state galleries with some of their London compatriots, he was not blind to the practical difficulties involved. The careful examination of individual works, the establishment of their provenance, their placement in an historical context, all took money which was in sort supply. Galleries had to make judgments, to satisfy funders public and private, people and organisations who did not always see the value of careful long term work. 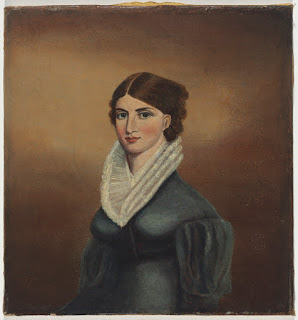 The Corys arrived as free settlers in 1823 and, in 1828, were raising cattle and horses on a large holding at Paterson, in the lower Hunter district. This rare early colonial likeness shows Frances ‘Fanny’ Cory at about 28 years of age. She is dressed in the fashions of the late 1820s which saw the addition of fussy Elizabethan-style ornamentation to the previously uncluttered Empire line.

Smith believed, too, that public galleries should combine exhibitions of work by current artists with displays from the collection. He also had a reasonably broad view of what constitutes art. Finally, he was a great supporter of the broad education role that he believed galleries should play.

While reading Smith, I was thinking about the role of regional galleries across the broader New England. Added force was given to those thoughts by the identification of yet more colonial paintings with New England connections. Before going on, I note that the regional or bigger public galleries are are only part of New England art history and current cultural life. There are smaller local public and private galleries, a multiplicity of artists and a range of private collectors.

While I have traced some of the history of the museum movement across the North, I haven't properly tracked the public galleries themselves. There is a problem here, for most galleries emphasise the date they received their first collection rather than the date the gallery opened for the first time. This was often in temporary premises and could be years after the first donation. Then there could be another long delay until permanent premises were acquired or constructed. The relatively large regional galleries that we know today are all relatively recent in historical terms. Their collections are also quite varied since the core reflects the varying interests of those who donated the collections.

On Smith's measurements, I think they do a pretty good job in terms of presenting the collections, in education services and in their displays by living artists. They do so despite limited resources with funding dependent especially on councils and on sporadic often project based NSW Government grants. There is some sponsorship, but the local pool of funds is relatively smaller than it was in the past and more hotly contested. This places the galleries in competition with each other and with other cultural institutions. 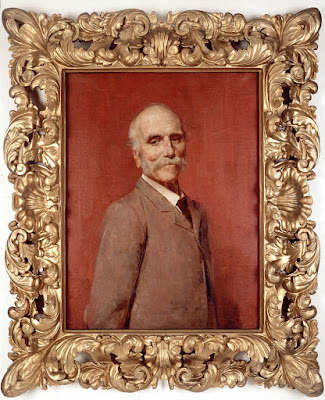 Recognising the constraints as well as just how well many are doing, I would argue that current approaches suffer from two weaknesses. In arguing this, I want to return to Bernard Smith.

An art historian, Smith argued strongly that Australian painting had to be seen in its European context. To his mind, that provided a richer. deeper understanding of individual works. However, in then writing about Australian art he created an historical and visual framework that became a living entity in its own right. But, with exceptions largely linked to Sydney and Melbourne, he did not discuss regional variations in Australian painting.

This leads me to my two weaknesses as I see them The regional galleries may place certain paintings or artists in a broader context, they may point to certain local links, but they generally do not provide any picture of the total oeuvre of New England related work nor of the ways those paintings fit into New England history. This story remains untold. 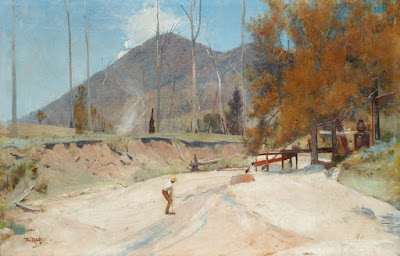 Tom Roberts, On the Timbarra - Reek's and Allen's sluicing claim c1894, Art Gallery of  NSW. This painting probably dates from the same trip in which Roberts began the Ogilvie painting.

The second related weakness, at least as I see it, is that while the galleries show current work, they do not really put that into any context. Of course they say something about the artist and the nature of the work, but it tends to be very one dimensional.

Like Bernard, I am an historian, although I make no claim to be either an art historian or critic. But I am conscious of the way in which I see patterns in art especially linked to area and style. 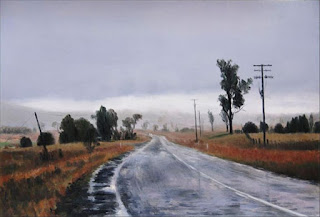 Back in 2009 I tries my hand at a photo essay, The Colours of New England, looking at the way colours changed across the North. In writing, I used a combination of paintings and photos with dashes of poetry. In the nine or so years since then I have added films, more paintings, more photos, more poetry and prose to deepen the picture that I had in my mind.

It would be nice to think that over the next decade our larger galleries might broaden their focus to make part of this story more accessible to New England audiences. There is a considerable story to be told.
Posted by Jim Belshaw at 4:48 pm

Hi JDB
I remember (just!) when the Newcastle Art Gallery opened in what was then called the Cultural Centre. It also housed the public library (or bits thereof), and also the Conservatorium, or maybe that was later. I remember the 'outrage' at the thought of spending public money on an 'elite' institution, ditto acquiring 'rubbish' modern works, eg Robert Dickerson. If I remember correctly, the first private commercial gallery was the Laman Street gallery (near the cultural centre). The Yarts were not big in the town I left in 1968. You really introduced me to Aus art and artists, and although I have slowed down a bit, I am still collecting esp Lindsay family stuff. Recently treated myself to Hugh Macrea's copy of the deluxe Fanfrolico Lysistrata, trans by Jack L. Already had to extend twice to enable available wall space. Can't downsize, no way. No minimalism here, although we're not as bad as John Ryan's house and library.

Hi JCW. I am glad that my positive influence continues! You may get to John's status in due course! I can see that you are working on it.

According to their web site - http://www.nag.org.au/About/History - the Gallery's opening, came in 1957, when 'Newcastle City Art Gallery', as it was then known, opened on the second floor of the War Memorial Cultural Centre, adjacent to the gallery's current home. Then "Led by director Andrew Ferguson, a purpose built Gallery was constructed in the mid-1970s and officially opened by Her Majesty Queen Elizabeth II on Friday 11 March 1977" Your memory is pretty good.

On Dickerson, something similar happened in Armidale when a a painting called something like burnt landscape won the city art prize. I have been unable to find the details!

Hi JDB
First time for some years that we have not heard from Suzanne R. Can you provide any updates? JS must now be well into his 80s, if not more.
PhD progressing very slowly. Canberra's continual over 38 degrees not conducive to study, esp as evoenergy keeps knocking out power for 8+ hours 'for your convenience'.
Judexxxx

I will message you on this one, Judi