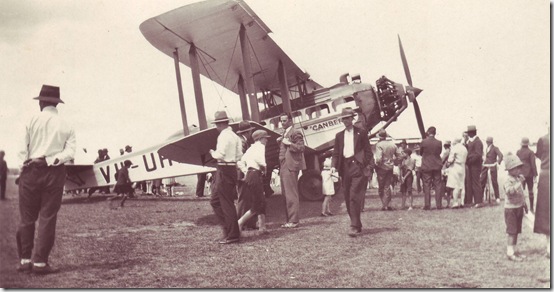 John Caling kindly sent me this photo taken by Leslie Henderson, his mother's step-brother and a keen amateur photographer.

The above attachment is a scan of a pic of a de Havilland DH61 Giant Moth taken at Armidale. I am afraid I do not know where or when. My Mum told me that this was the first passenger aircraft to land in Armidale. I do know that QANTAS purchased two of these aircraft but withdrew them from service in 1935 because of unreliability problems. These two aircraft operated out of Longreach so the one in the pic is obviously not from QANTAS.

The picture made me curious. If you look at the clothes, you can see it's quite early. Men's hats remained relatively constant. However, the women's and especially the girls' hats suggest late twenties or early thirties. So I started doing some digging.

The plane in question - VH-UHW - was purchased by Leslie Hubert Holden in 1928.

L H Holden was very much in the tradition of the early fliers well summarised in the song:

Those Magnificent Men In Their Flying Machines.
They Go Up, Tiddly, Up, Up.
They Go Down, Tiddly, Down, Down.

According to Carl Bridge's entry In the Australian Dictionary of Biography, Holden enlisted in the Australian Imperial Force in May 1915 and went to Egypt as a motor driver. In December 1916, now in France, he was one of the first batch of 200 volunteers to train in England for the Australian Flying Corps.

Carl suggests that Holden's mechanical sense and his calm but adventurous nature made him a natural pilot and he quickly won his wings as a lieutenant. Flying a D.H.5 in No.2 Squadron, A.F.C., he saw the first Australian air action of the war over St Quentin on 2 October 1917.

Throughout the battle of Cambrai in November he strafed the enemy front line from a height of fifty feet (15 m); three of his machines were 'written off' under him. In one encounter, the famous von Richthofen fired at him from below; the bullets ripped up through the floor and tore his leggings. Holden nursed the badly damaged plane home, losing a wing on landing. His ability to return alive in wrecked aeroplanes earned him the nicknames of 'the homing pigeon' and 'Lucky Les'.

After returning to Australia in June 1919, he became Sydney manager of Holden's Motor Body Builders, the Adelaide company formed by his uncle H. J. Holden, with his son (Sir) Edward W. Holden. However, bitten by aviation bug and with financial support from friends, he bought a D.H.61 biplane in 1928 which he named Canberra.

Flying the Canberra, Holden operated charter flights from Mascot, Sydney. In April 1929, he was engaged by the Sydney Citizens' Relief Committee to fly to north-western Australia in search of (Sir) Charles Kingsford Smith and Charles Ulm who had disappeared while flying to England. Holden found them on a mud-flat on the Glenelg River near the Kimberleys and returned a hero. However, when newspapers accused Kingsford Smith and Ulm of a publicity stunt, the Sydney committee refused to cover his expenses!

In 1926 gold was discovered at Wau in the then Australian mandated territory of New Guinea. A rush began. Attracted by the aviation opportunities, in September 1931 Holden and the Canberra made what was probably the first flight from Sydney to New Guinea to begin a successful air-freight business.

This was not quite the end of the story. In New Guinea, the locals raised 25,000 pounds to continue Holden Air Transport.

And what happened to the Canberra itself? On 2 November 1934, it hit a building in Rabaul and was destroyed by fire.

This story is drawn especially from Carl Bridge's entry on L H Holden in the Australian Dictionary of Biography. The Australian National Library has a number of photos of the Canberra. A fascinating picture of aviation in New Guinea at the time can be found here. You can see a Holden Air Transport badge featuring the Canberra here. The De Haviland archives have details of the fate of all DH planes. For posts on New England aviation including New England Airways click here.

I almost deleted this, Mark, then decided what the hell.