In Bellingen, writing, obituaries and skills I referred to the obituary by Strath Gordon of Dutch born Jack Dalmayer. I quote from that obituary:

In July, 1945, Dalmayer found himself in a camp in the northern NSW town of Casino, an establishment known as the ''Victory Camp'', which had been declared Dutch territory by the Australian government early in the war and was occupied by the 1st Battalion, Netherlands East Indies Army, consisting of Dutch and Indonesian soldiers. The new group came to be known as ''The Dutch Boys'' or ''The Casino Boys''. But a month later, the war in the Pacific ended.

The Casino Boys, to put it mildly, were at a loose end. The RAAF had no further interest in them. With the proclamation of Indonesian independence on August 17, 1945, many of the Indonesians felt they could no longer serve under Dutch command. The Australian union movement, supporting independence, refused to allow the Dutch servicemen to be shipped to the East Indies.

Relationships between the prisoners and their guards were relaxed. The Dutch Boys began to take part in the Casino social scene, seeing movies and playing sport. Eventually, the Indonesian soldiers were allowed to return home and the Dutch were sent back to the Netherlands.

As I said at the time, I had no knowledge of this camp, nor of the Dutch or Casino Boys, so I 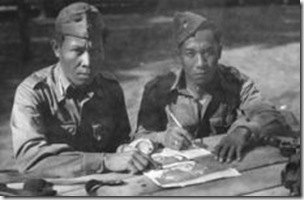 did some digging around.

This photo shows, I think, a picture of Dutch Surinam soldiers at the camp.

I didn't find a lot on-line, but what I did sounds interesting. As the obituary suggests, Casino and the camp became embroiled in the Indonesian struggle for independence. The references I have so far found:

Not a lot, but enough to hint at an interesting story. I wondered if any readers might know more.

Interesting story and thanks for share the link especially of Suriname in WW II. No doubt, many historical links between Indonesia and Suriname.

Hi Jim...unfortunately there's not much info. on the "Victory Camp".

I live not far from it and my late mother "dated" one of the Dutch Guards for a while.

The only other net info I can find other then what you already have is the camp infrastructure was tendered off in mid January 1947.

Interestingly there is a mention of the camp being used by homeless people between the dutch leaving and demolition and the ensuing dispute between council and the Army over the army wanting the council to disconnect the water supply in the hope they homeless would move on?

Thank you very much, ozhole.

Where did the last piece of info come from? It wasn't in the trove references I saw - those three were ads for sale!

There's is some more info on "trove" if you want to purse the political angle and even a story about a "Gestapo" connection.

Try an advanced search with just "casino,nsw" and limit it to 1939 to 1950 gets you about 26 pages to wade through but picked them up for me.

Thanks, Tony. I'll do that. It will also help me flesh out the broader history.

Hi Jim
Not sure if you're still looking for further information about the "Casino Boys", but I may be able to help you.

My mother has written a book "Casino Boys". My father was one the "Casino Boys". The book chronicles the history of the camp and also contains personal recollections of many of those involved with the camp at the time.

Let me know if you're interested and I can put you in touch with her.

Dear Geoff,
Very interested in what you'd know about the Casino Boys from what your father told you and of course the book your mother wrote. Let me know how I could get in touch with you / her / get the book.
Greetings, Joop

Sorry for the delay in responding to your comment, Geoff. I would like to learn more and get a copy of your mum's book. How do Joop and I do this?

Dear Jim,
I'm researching the history of Indonesia 1942 - 1950, especially the period 1945 - 1950.
Have you any reference regarding the role of Australian Forces in Indonesia under command of Lieut.General Sir Leslie Morshead, 1945 - July 1946?
Please send mail to: batara44rh@yahoo.com
Thank you very much.
Greetings from Jakarta
Batara Richard Hutagalung

Hi Batara. I will email you.

Hello my father trained here after Timor in 1942. He was a mortar man in Timor and came to Casino after the KNIL lost half of their men. I have some pictographs him there and of course later in life.

Hello Geoff my dad was in Casino in 1942 getting his C.I.C. Training would love to read the book your mom wrote.

I have been tied up and suddenly realised that I had not responded to comments. I wrote some later material. I will bring links to it here as a postscript

My father Reinier Frenken was one of the Dutch boys who was at the Victory Camp in Casino, and i am looking for any information on his life whilst at the camp.
If anyone would help I would be forever grateful, as we know nothing of his time there, except the names of a few of his mates, e.g John de Witt, Gys v/d Poel, Mart de Haan to name a few.
Thank you
Maria Finlay-Frenken

My apology for my incredibly slow response Maria. Please email me at ndarala(at)optusnet(dot)com(dot)au


I have just stumbled on your site .My father,Jan Ivits,was a Casino Boy.He was from Eindhoven and joined the Dutch Air Force when his city was liberated from the Germans.My mother was from Casino( Irish Australian heritage) and they married in 1949 when he returned to Australia following demobilisation.My mother's sister Rosalia also married one of the Casino Boys,Thom Van Wees,who was from Breda.

Quite a few of the Casino Boys settled in Australia and married local girls.Some even lived in Casino.One Willy Vrolyks was a well known Soccer coach in Sydney and was awarded an OAM for his services to Soccer.

The Casino Boys did have reunions from the 1980s onwards mainly at Coffs Harbor but as most are deceased these no longer occur.

Does anyone know what happened to the soldiers from Suriname who were in the Casino Camp? Did any of them marry local women? I am researching this for my Fulbright Sc

I am sorry for this incredibly slow response, Karen. The short answer is no so far as I am concerned, although others may.